ISA95 In the IoT & Digitalization Era

Traditionally, ISA95 has been implemented in a 5-layer system network architecture, implying that each level only communicates through adjacent levels.  This implementation was built around the technology available at the time it was conceived, which has change significantly with high power computers, high-performance networking, and embedded edge computing, all supported by more sophisticated and refined software that has been developed for general computing.   The digitalization of manufacturing is leveraging new technologies, including higher bandwidth networking, IoT communication standards, real-time business enterprise systems, cloud computing, OPC UA, and powerful embedded computing in field devices including sensors, instrumentation, valves, motor controls, and other devices.

These, along with other factors, are impacting the industrial automation architecture model which is starting to bifurcate with middleware functions distributed to enterprise/cloud and into field edge devices like sensors, actuators, and motor controls.  This is becoming the common computing architectural model.  All one needs to do is consider that the smart phone in their hand is a powerful edge computer, which can interact with enterprise and cloud computing when one requires more data and power for an application.

Drivers of Change in Automation

This new manufacturing architecture follows the general computing architecture trends, which are driving intelligence as far out to the edge as possible, and are accelerating with IoT concepts and technology.  This is been the history of computing, starting with large mainframe computers with networks of “dumb terminals”.   Over time smaller computers and PCs distributed functions over networks, and distributed computing has been refined in many ways with Service Oriented Architecture, HTTP, Remote Procedure Call (RPC), XML, and other functions.

The industrial control & automation industry started with central computers and control rooms, where field devices were hardwired to the central control room. This later evolved to distributed controllers over a network as technology made this possible.  The adoption of new technology for industrial control & automation systems has always lagged behind the computer industry. For example, the IBM PC was introduced in 1981 and there was dramatic growth with follow-ons from other manufacturers.  Industrial automation suppliers, however, initially took the position that was not appropriate for industrial and process automation, preferring to use their proprietary hardware and software.  Over time this changed, particularly with the introduction of Microsoft Windows in late 1985, which had a profound impact on industrial automation. This started with Wonderware InTouch software and was later adopted by virtually all industrial automation suppliers, who had initially resisted. Innovation is typically introduced to an industry by small, nimble companies. Microsoft Windows provided a rich environment, which spawned a large ecosystem of developers providing software for a wide range of applications including databases, analysis, advanced control, Manufacturing Execution Systems  (MES), batch management, production tracking, and historians.  Microsoft Windows became a tool to efficiently bridge real-time plant operations with IT and business systems for more unified and coordinated manufacturing and production.

Efficient digitalization of production leverages the power of new technology. It is important to decouple ISA95 from the traditional layered network hardware model, particularly middleware, which will evaporate in the new environment.  The value of ISA 95 is the framework, modeling, and vendor independent common information models.

The NAMUR Industry 4.0 for Process is a great example of defining highly distributed control into field devices with the goal of achieving a holistic integration of automation, business information, and manufacturing execution function to improve all aspects of production and commerce across company boundaries for greater efficiency.  The road map describes how communication and the management of information will become increasingly important, as information from sensors is integrated into business systems.   New smart sensors will be able to measure several metrics, calibrate and optimize themselves, and interact directly with other sensors and actuators – while also communicating with controllers, enterprise, and cloud applications simultaneously.

ISA95 and the RAMI 4.0, Reference Architecture Model Industrie 4.0 (Industry 4.0) may be good way to think about new industrial automation architectures.  Industry 4.0 (also termed Industrie 4.0) is a holistic view of manufacturing enterprises started in Germany with many worldwide cooperative efforts including China, Japan and India.  Industry 4.0  concepts, structure, and methods are being adopted worldwide to modernize manufacturing. 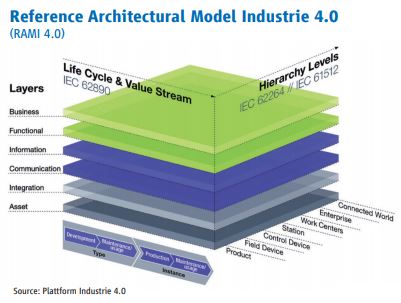