Users are pushing motors closer to their theoretical torque and power limits.  In order to protect motors under these rated conditions, accurate thermal models of the motor are needed.

In the last several years, many digital servo drive producers have developed features to prolong the life of both the rotary and linear motors they are paired with.  At one time, a simple thermal switch or thermal couple embedded in the motor's winding was all that was required to protect the motor from overheating.  Today, this is no longer the case as users are pushing motors closer to their theoretical torque and power limits.  In order to protect motors under these rated conditions, accurate thermal models of the motor are needed.

Basic thermal models typically monitor the motor's average winding current.  More advanced models monitor the motor's rotor position, speed, ripple current and average winding current.  All of these models require thermal impedance information provided by the motor manufacture and knowledge of the ambient temperature.  These models can then be programmed into a DSP and used in real time to predict both the motor's winding and case temperatures.

The user must decide what the maximum allowable winding or case temperature can be.  This is important as the higher the average winding temperature is allowed to go, the shorter the predicted life of the motor will be.  In addition, the user may also decide if the motor should fault in an over-temperature condition or have its output torque reduced to a value lower than its continuous rating in order to allow the motor time to cool.  All these features are economically possible with the continual introduction of new lower cost DSPs and mixed-signal ASICS.

Servomotor Thermal Ratings
For a given motor package size and heatsink combination, there is a fundamental limit on the maximum allowable continuous power loss that can be dissipated as heat.  This assumes both the ambient and maximum allowable winding temperatures are known as well as the desired life expectancy of the motor.  Servomotors are also specified as having a particular continuous shaft torque rating.

One important servo motor specification is the insulation winding class.  Typical permanent magnet brushless motors use class H winding insulation.  This means that for every 10 degree C rise in temperature, the average life expectancy of the winding insulation is reduced by approximately 50% (see Fig.1) 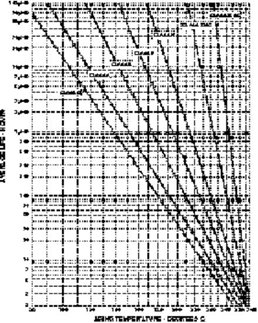 The losses for a three-phase sinusoidal servomotor can be modeled as the sum of several components as shown in equation .

Each of these loss components can be approximated by the relationships in equations - .  In equation , Rm is the motor's electrical resistance phase to phase at a specified operating temperature.  The motor's effective phase current, irms must also be determined from the motion profile.

Equation shows the relationship between the motor speed and magnetic loss.  The value of n can range from 1 to 2 depending on the motor design.  The values for K1 are generally quite small allowing for this term to be safely neglected for low pole count motors.

Equation illustrates the relationship between the mechanical losses and speed.  This term is the combination of bearing friction, F and viscous damping, K2.  Again, this term is also generally neglected except for cases of very high speed or very small operating torque's.

These assumptions allow us to approximate equation with equation .

It is very common to operate servomotors above their continuous rating for short periods of time.  A typical speed vs. torque curve for a permanent magnet servomotor is shown in Fig.2.  The points label 1, 2, 3 and 4, relate to a common trajectory.  The servomotor starts at rest (point 1), then applies near full maximum torque at zero speed (point 2).  The motor then speeds up (point 3), and then when it achieves constant velocity, at which time the required torque decreases towards point 4. 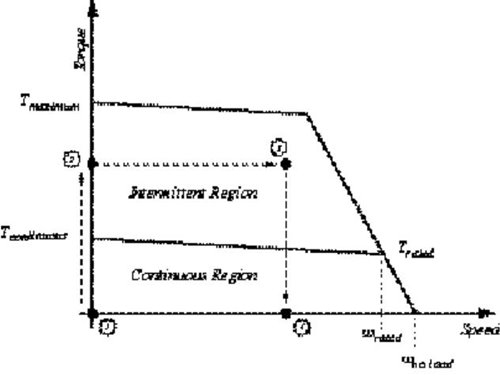 Figure 2.  Typical Speed vs. Torque Curve for a PM Servo Motor
The amount of time the motor can spend in the intermittent region varies with motor design, however using the motor's case thermal time constant, tm a derating curve as a function of duty cycle, D can be obtain.  The definition of duty cycle, D is given in equation .

For brushless permanent magnet motors, the torque is directly related to the motor current.  Motor manufacturers will then give continuous current overload curves for various intermittent duty cycles.  A typical current derating curve for various duty cycles is shown in Fig.3. for a motor with a 10-minute thermal time constant. 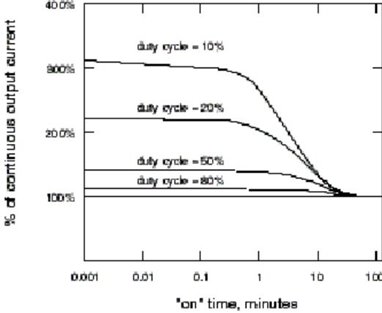 For a simple rectangular pulse of current, Ploss total is constant and the motor's case temperature, Tc can be determined by equation.

The motor's case to ambient thermal resistance, Rqca is provided by the motor manufacture and has the units of degrees C/Watt.

Example Profile
A pick-and-place mechanism might be used and programmed such that the transit time between picking and placing a part is minimized.  This would require the use of a triangular motion profile.  Figure 4(a) shows the velocity profile for this simple move with a duty cycle, D of .5.  The corresponding motor current, I, is shown in Fig. 4(b).  For this profile, the rms current can be calculated using equation. 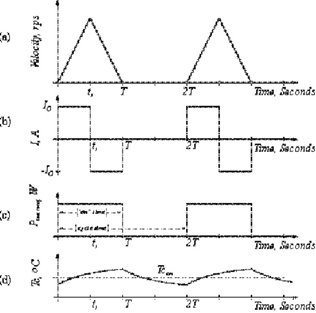 The problem now arises on how to estimate the average winding temperature, Twave and more importantly its instantaneous value, Tw.  The real winding temperature will have a profile similar to Fig.2 (d); however, it will have a much shorter time constant due to the windings having less thermal capacitance and lower thermal resistance than the motor case.  In order to estimate this, a higher order transient thermal model needs to be developed. 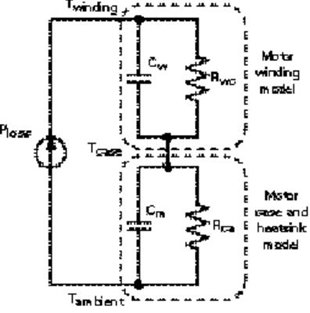 The additional equation for the winding temperature has a form similar to equation and is given in equation .

The result of using two time constants allows for an accurate model of the winding temperature as a function of motor current in excess of twice the continuous values.  This is important, as it is possible to burn a motor up without the case of the motor noticeably warm. 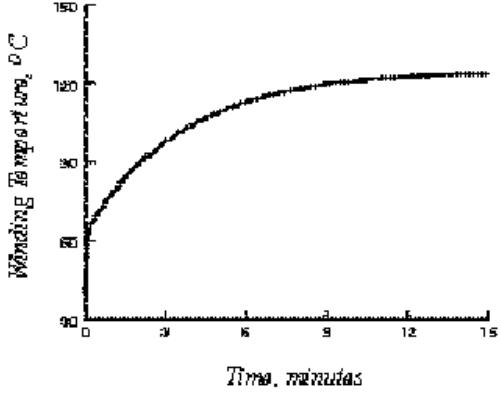 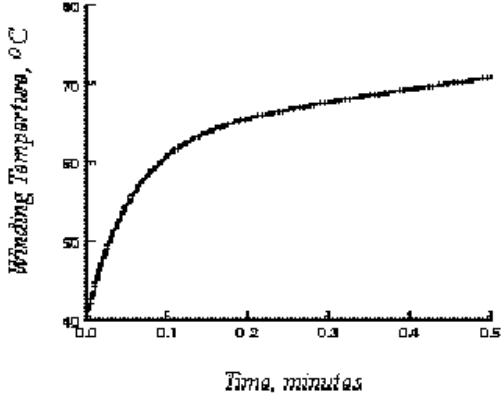 Physically, it takes a certain amount of time for the winding heat to transfer from the wire to the motor case.  As the case is slowing warming up, its heat is conducted through both its heatsink and air.  This second order model can be used to prevent fusing the motor wire.  In addition, the model can be slightly modified to take into account winding hot spots.

Thermal Protection
Most servomotors include some type of thermal switch embedded in the windings.  The frequency response of this switch makes it impractical for it to prevent motor thermal damage when the real motor currents are in excess of two times the continuous rating.  In addition, there is usually only one switch in the motor, and chances are it is not located where a thermal hot spot might develop.

When the peak-to-average ratio in motor current is higher than two times, the switch and most thermal couples are ineffective and a real time motor thermal model must be used.

Usually, the motion profiles are not simple pulses as in the previous example.  The digital drive must now take into consideration any arbitrary torque/current profile.  This is handled by the drive solving in real time the estimation of the motor winding and case temperature using the digital form of equations 8 and 9 .

For example, in Parker Compumotor's digital Gemini series drive, the motor winding temperature, Tw, is calculated every time the motor current is sampled.  At each instant, the instantaneous power loss is determined.  Then by using a set of recursive equations, the change in temperatures for both the winding and case can be calculated. The values of A1, A2, and A3 in equation are calculated by using Rm, Cm, Rw, Cw and the servo update rate.

Several drawbacks of the simple thermal model include the omission of the PWM ripple currents.  Low inductance motors that operate at relatively high bus voltages can exhibit significant current ripple.  Depending on the switching frequency of the digital drive, it may be difficult to get enough current samples to adequately measure the ripple current.  This drawback is handled by including additional derating factors for the motor.

Finally, the ambient temperature still needs to be measured as the models can only provide relative temperature information.

Conclusion
To best use a servomotor's safe operating area, detailed information about the motor's transient thermal behavior is needed.  Using this information, a simple thermal model can be employed by a digital drive to predict the winding temperature under motor operation.  When unsafe conditions arise, the drive can then make decisions on how to best alert the user while protecting the motor.

The user does not want to oversize the motor such that its cost is out of line.  Typically, the smallest and lowest cost motor is chosen that will provide the needed continuous and peak torque while maintaining a maximum winding temperature that ensures an average life that is acceptable for the application.

As the cost of DSPs continues to decrease as the processing power increases, it will become feasible to incorporate better thermal models of the motor.  This will ultimately allow the motors to operate closer to their theoretical limits and provide the best value to the user.

Dave Kaiser is a Staff Engineer for Parker Compumotor