IEC 61850 is the new Ethernet-based international standard for communication in power generation facilities and substations.  The goal of this standard is to integrate all of the protection, control, measurement, and monitoring functions within a substation, and to provide the means for high-speed substation protection applications, interlocking and intertripping.

IEC 61850 is the new Ethernet-based international standard for communication in power generation facilities and substations.  The goal of this standard is to integrate all of the protection, control, measurement, and monitoring functions within a substation, and to provide the means for high-speed substation protection applications, interlocking and intertripping. These devices are generally referred to as Intelligent Electronic Devices (IED).

I discussed the standard with Jeff Vasel, Electrical Integration, and Asset Optimization Manager at ABB, an avid supporter of IEC 61850. Jeff described the need for IEC 61850 as a way to provide a single, open, object-oriented protocol.   The power industry today has a number of unique protocols, many proprietary.  He described how the protocol is object-oriented and implemented by using a producer/consumer model, incorporating Quality Of Service (QOS) and multicast to allow any unit to communicate with other units. (Editors note: These are established concepts used by a number of protocols such as EtherNet/IP and others.)   IEC 61850 also takes advantage of the Manufacturing Message Specification (MMS) an international standard (ISO 9506) dealing with messaging system for transferring real time process data and supervisory control information between networked devices and/or computer applications. 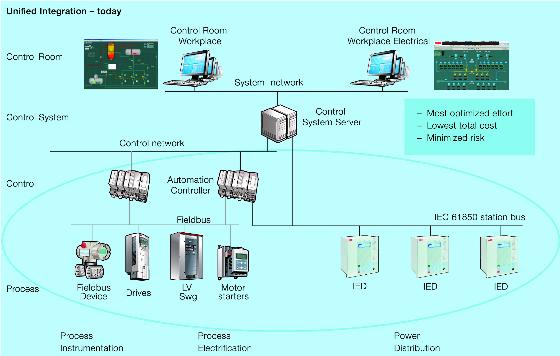 Part of IEC 61850 is the Substation Configuration Language (SCL). This is a common language which can be used to exchange information, independent of manufacturer. This includes representation of modeled data and communication services specified by IEC 61850 standard documents. The complete SCL representation and its details are specified in the IEC 61850-6 standard document. It includes data representation for substation device entities.  All associated functions are represented as logical nodes, communication systems and capabilities. Each proprietary tool must have a function which allows the export of the IED’s description into this common, XML-based language. The ICD file (IED Capability Description) contains all information about the IED, which allows the user to configure a GOOSE message.

The IEC61850 GOOSE is an advanced version of the UCA GOOSE.  A GOOSE message is used to exchange data between IED’s (Intelligent Electronic Devices). GOOSE is a mechanism for fast transmission of substation events, such as commands and alarms. A single GOOSE message sent by an IED can be received and used by several receivers. One device (sender) publishes information, while only the subscriber devices are receiving it.  The reaction of each receiver depends on its configuration and functionality.

All ICD files get imported into the IEC61850 System Configurator and the GOOSE messages can be programmed by specifying the sender (publisher) and the receiver(s) (subscriber) of a message.  The whole description of the system, including the description of the GOOSE messages are stored in the SCD file (Substation Configuration Description).  Each proprietary configuration tool must be able to import this SCD file and extract the information needed for the IED.

The major advantage of using IEC 61850 is interoperability among IEDs from different vendors. It has a standard data naming convention, self-describing devices, virtualized modeling of logical devices, and a common language to configure devices.

The goal of this approach is to have complete interoperability between devices and less project engineering and commissioning time.

The UCA International Users Group is a not-for-profit corporation consisting of utility user and supplier companies that is dedicated to promoting the integration and interoperability of electric/gas/water utility systems through the use of international standards-based technology. It is a User Group for IEC 61850, the Common Information Model – Generic Interface Definition (CIM/GID as per IEC 61970/61968), advanced metering and demand response via OpenDR.