Off-road vehicles are designed to perform arduous tasks in extreme outdoor conditions. In industries such as construction, agriculture and forestry, vehicles must navigate on uneven surfaces while lifting and moving heavy loads. For vehicle operators, the chances of tipping or rolling over are high, and safety is a concern.

Abstract:
Off-road vehicles are designed to perform arduous tasks in extreme outdoor conditions. In industries such as construction, agriculture and forestry, vehicles must navigate on uneven surfaces while lifting and moving heavy loads. For vehicle operators, the chances of tipping or rolling over are high, and safety is a concern. By installing preventative measures such as electronic sensors to detect the vehicle’s operating condition and alignment, operator safety is increased. This white paper will describe the advantages of using three distinct sensor types in off-road vehicles to improve operator safety.
Introduction:
To prevent vehicle operator injury, electronic sensors can be used in off-road vehicles to warn the operator if the vehicle or its load is in danger. These sensor families include tilt sensors, inductive position sensors and pressure sensors. The technologies behind each sensor family will be examined as well as application examples presented.
Environmental exposure is also a safety factor. As virtual "plants-on-wheels," off-road vehicles are exposed to extreme shock and vibration, harsh chemicals, dirt and electrical interference. The sensors used on these vehicles must be able to withstand these same extreme conditions to prevent mechanical damage and downtime.
Tilt Sensors Monitor the Safe Horizontal Alignment of Vehicles
Rugged terrain and moving machine parts can quickly shift the balance of a vehicle. A dangerous alignment can cause hazardous conditions for a vehicle operator. To assist operators in monitoring the horizontal alignment of vehicles, tilt sensors precisely detect slight angle variations. Tilt sensors can report, for example, the exact road-grade angle, boom angle, platform angle and crane-level angle. Upon receiving these signals, an operator can take action to avoid an unsafe situation.
Tilt sensors must be able to withstand the extreme shock, vibration, and harsh elements associated with outdoor use. Direct exposure to chemicals, dirt, moisture, sunlight, and electrical interference is common. Design features that enable tilt sensors to resist the elements and perform in extreme environments include:
Two very different, yet highly effective sensing technologies can be applied to verify horizontal alignment.
Electrolytic tilt sensing
The first technology is referred to as electrolytic tilt sensing 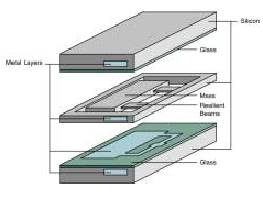 Figure 2. Micro electromechanical sensing (MEMS) technology: When the vehicle tilts, the movement is transferred to the beams that deflect to take the inertial forces of the mass. Any change in capacitance is proportional to the tilt of the sensor.
Any change in capacitance is proportional to the tilt of the sensor, which then is converted to a change of voltage and transferred as an analog value to the vehicle controller. Sensors incorporating this technology are better suited to applications where a single-axis wide tilt angle (±90°) and lower precision (±1°) are needed.
Inductive Position Sensors Monitor the Position of Moving Parts on a Vehicle
Inductive position sensors are designed to detect the position of moving parts on an off-road vehicle. Multiple sensors can be used on one machine to maximize the operation of the vehicle and to protect the vehicle’s operator. For example, a position sensor can be used on an industrial crane’s cable drum to detect the end of its cable, protecting the crane against machine damage. Position sensors can also monitor the rotational speed of a gear, detect the position of a platform, or sense the open- and closed-position of vehicle cab door. The position sensors provide continual feedback on the operating condition of the machine’s moving parts and send this information to the vehicle operator.
Position sensors are designed to withstand outdoor conditions and can include the following features:
Operating principle of inductive proximity sensors
Inductive proximity sensors take advantage of changes in a resonant circuit caused by eddy current losses in conductive materials. An inductive proximity sensor contains four essential components: a coil of wire wrapped in a ferrite core, an oscillator circuit, an evaluation circuit, and an output circuit. When voltage is applied to the sensor, an oscillating current flows through the coil and radiates an electromagnetic field from the active face of the sensor. This field is directed and shaped by the ferrite core.
When an electrical conductor or metal target enters the electromagnetic field, eddy currents are drawn from the oscillator and induced into the target. These eddy currents draw energy from the electromagnetic field. The losses in energy caused by the eddy currents are due to the conductivity and permeability of the target, the distance and position of the target, and the size and shape of the target.

Figure 3. An inductive proximity sensor detects all metals with its high-frequency electro-magnetic field.
When the metal target is positioned at a precise distance from the active face of the sensor, the energy loss caused by the eddy currents becomes so large that the amplifier cannot output sufficient energy to maintain oscillation and the magnetic field collapses. The breakdown in oscillation is detected by the evaluation circuit, which then changes the state of the output circuit.
Pressure Sensors Monitor a Vehicles Hydraulic System
The hydraulic system of an off-road vehicle is the heart of the vehicle and is responsible for operating the main controls. Applications such as loading and unloading, transporting, lifting, and processing are achieved through the hydraulic system. Loss in power can result in vehicle downtime and potential injury to the operator. Pressure sensors can continuously monitor a vehicle’s hydraulic system and provide feedback on the system’s operating condition. Pressure sensors today are stainless steel and compact. The base of the sensor incorporates a ceramic sensing element that enables over 100 million switching cycles, withstands pressure spikes, and resists corrosion. The design of the sensing element ensures excellent repeatability and accuracy across the entire operating range. Similar to inductive proximity sensors, electronic components are mounted on flexible film for shock and vibration resistance up to 1000g.
Additional design features can include:
Pressure sensors operating principle 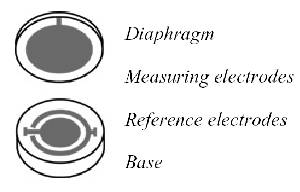 The capacitance is inversely proportional to the distance between the electrodes. If the distance changes by a small value because of an increase in pressure applied to the cell, the capacitance changes proportionately. This signal is then processed by a microprocessor.
Sensor testing and quality assurance
Extreme heat and cold, rain, dirt and chemicals can slowly deteriorate a vehicle and its sensors. To ensure resistance to the elements, sensor should be subjected to a variety of tests. As a guideline, these tests should include an electromagnetic compatibility (EMC), temperature shock, temperature humidity, salt spray and shock. Following are descriptions of these tests
EMC Test
Since all of the electrical devices used in a mobile application are dependent upon the same source of power, ample consideration must be given to electromagnetic compatibility. Sensor testing should be placed in an environment that simulate worst-case conditions present in the environment and tested to ISO11452-2 Test level IV (100 V/m). This level is over five times higher than the comparable industrial standard. 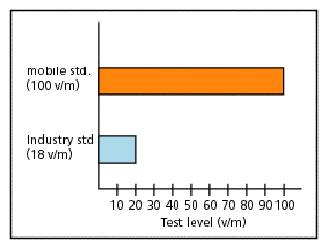 Temperature Shock Test
Optimal control system performance must be maintained regardless of the temperature changes that occur in normal operation. This test should be conducted to ensure that rapid changes in temperature have no impact on the integrity of the system. 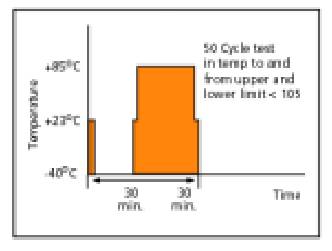 Temperature/Humidity Test
Relative humidity is the percentage of water vapor present in the air compared to fully saturated air at the same temperature. The objective of this test is to simulate conditions that occur within an operating environment that would cause premature failure of conventional electronic systems (i.e., metallic component corrosion, electronic component drift, mechanical reliability of conformed encapsulant, dielectric effects). 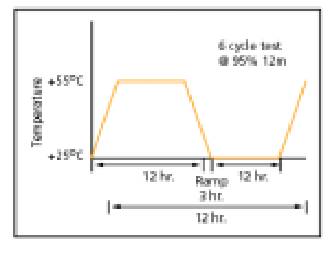 Salt Spray Test
This test is designed to accelerate weathering by direct exposure in a highly corrosive atmosphere. This test is also very useful in predicting the potential for mechanical failure from corrosion, due to long-term environmental exposure. 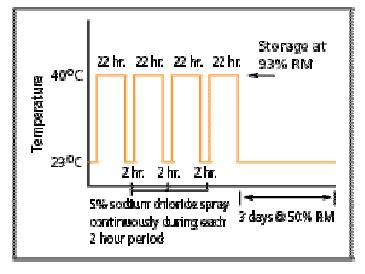 Shock Test
Proximity sensors can be exposed to high levels of shock in mobile environments. Sensors should be tested at a shock level of at least 500g. A sensor test of this caliber is routinely performed by ifm efector inc. on their efector-m proximity sensor line. 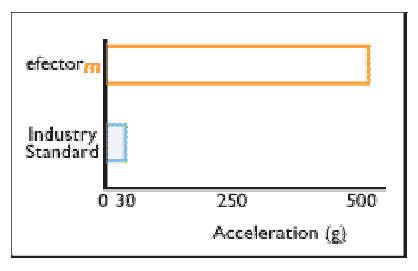 Bibliography:
1, 2, 5. 2004, Control Systems for Mobile and Robust Applications, ifm electronic, Tettnang, Germany.
3. 2003-2004 Position Sensors Catalog, ifm efector inc., Exton, PA.
4. 2003-2004 Fluid Sensors Catalog, ifm efector inc., Exton, PA.
5. A silicon mass is suspended in the sensor body by two resilient beams between two stationary capacitor plates. When the body tilts, the movement is transferred to the beams. The beams deflect to take the inertial forces of the mass. The deflection changes the relative position of the mass between two plates. Because each of the above plates is part of two separate capacitors, the deflection creates a reciprocal change in capacitance in each of the two.1. Sensors filled with electrically conductive liquid are fitted with two internal measuring cells. By applying an alternating voltage between the cells’ electrodes, current flows through the liquid and generates an electrical field. If the sensor tilts, the fluid surface remains level, so the electrical field changes – as well as the fluid’s level-dependent resistance. The measuring cells monitor any change in the liquid’s conductivity and thus detect angle variations of the X and Y axes with precision. Sensors using this technology are appropriate for platform leveling (narrow tilt angle ±15°) or where high precision (0.025°) and a flexible network connection are advantageous.

This article was written and provided by ifm efector.  Applying tilt, position and pressures on off-road vehicles will help to ensure a vehicle operator’s safety. Companies such as ifm efector inc. offer tilt and alignment sensors that are instrumental in preventing rollover and maintaining vehicle balance. ifm efector’s position sensors provide reliable position feedback of moving components including cranes and platforms. The company’s pressure sensors can continuously monitor a vehicle’s hydraulic system and send an output on the vehicle’s operating condition. Working together on a vehicle, these sensors will ensure a safer vehicle and thereby protect its operator.