The industrial Automation.community can benefit in many ways by taking a close look at how 1394 has benefited the world of consumer electronic devices. The impact of 1394 on the industrial control field is likely to be as disruptive and revolutionary and will enable new applications to be developed due to the flexibility and improved economics of this new control architecture.

Not only is the control and monitoring of all these parameters important, there needs to be a seamless transfer of Control signals to and from these Distributed Control Systems to central controllers which makes networking a major component in successfully implementing these open systems. The objective of a networking topology in industrial automation systems is threefold:

Industrial automation is commonplace in most conventional manufacturing units like textiles, chemicals, or paper and also in evolving fields of drug discovery, clinical assay and the likes. Increasing competitive pressures insist that these complex controls with extremely high throughputs and miniaturization, be implemented with cost effective electronics and robust software. Though high end machines for advanced industries are built in relatively smaller volumes compared to the consumer goods, the need to curtail capital expense on them is born out of the need for cheaper end products they will produce and hence the need for each successive generation to perform at higher levels and lower cost.

IEEE-1394 or Firewire was initially developed as the high speed data bus for consumer technology, but shows immense potential to tackle both higher performance needs and lower system costs as required by industrial automation. Combination of IEEE- 1394 and fast-embedded processors enable new cost effective, high performance architecture for advanced machine design and other real-time automation tasks. The industrial adoption of components originally designed for higher volume consumer applications are a certainty for next generation industrial controls.


IEEE 1394 emerged as a serial bus standard in 1995, after being initially defined as Firewire" by Apple. Rapidly it became the bus of choice for the Digital Consumer Electronic manufacturers owing to its extremely high data transfer rates (upto 800Mbps) and support for Real-time data streams. The dream of finally being able to Internetwork all consumer devices in a home became a possibility with 1394 as Peer-Peer communication became a reality. The guaranteed delivery of data coupled with other above mentioned advantages made 1394 a boon for Multimedia applications.

IEEE 1394 is now suitably positioned to move into the orbit of Industrial Automation Systems and radically change the approach to automation control design by challenging conventional bus technologies.

Current solutions in Industrial Automation and Instrumentation can be characterized as centralized and backplane oriented. Backplane based controllers were considered to be natural choices for the designers of yesterday as it was assumed that they could provide high communication speeds needed for Industrial processes like synchronizing motion, synchronizing images and data acquisition. The rack mounted back plane, which is the standard implementation for most Industrial and laboratory automation controllers, uses bus solutions like VME, VXI, and PXI apart from proprietary buses like Modbus. In recent times PCI buses have gained popularity in this market segment owing to penetration of Windows based PCs.

In the conventional architecture, all sensors, motors, digital inputs and outputs and analog signals are cabled from the point of use to converge at the centralized controllers with individual backplane cards designed to handle each specialized function. All signals are brought to the physical location of the system controller using multi-wire cable bundles.

Diagram 1 is a schematic of a typical Automation Machine system with 6 axes of motion control, machine vision and process control. These types of Machine Systems typically use several specialized backplanes to implement different control functions. Bus to bus communication between these various subsystems is often through traditional RS-232/422/485 serial communication channels or through bus converters. This centralized approach limits reliability and configurability as hundreds of conductors are required to route signals to the central control chassis. 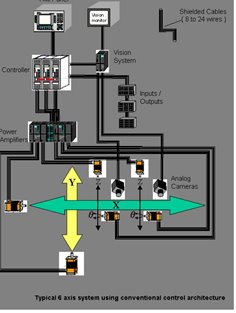 Overall this traditional approach is cumbersome, physically larger and has higher costs in the range of $10,000 to $30,000 depending upon performance specifics. Another big problem is the software used for controllers. Due to the lack of standard interfaces, different vendors follow different software approaches to develop various subsystems and to integrate them proves to be expensive and time consuming.

To avoid the use of a centralized back plane based system, it is important to localize control of devices performing similar functions. This Distributed Control System (DCS) architecture uses some form of serial or parallel cable to link already digitized information from point of use. In DCS analog signals are quickly digitized, and functions that do not need to be centrally supervised are localized.
The advantages of using DCS are as follows:
Diagram 2 is a schematic of a Distributed Control System showing localized control and linkage of digitized signals from point of use.

Many distributed control schemes have been developed and implemented for industrial applications over the past three decades. The oldest were based on Field Bus and its derivatives with newer technologies like Device Net, CanBus or ProfiBus taking over. These buses had data transfer rates in the range of only a few megabits/second which was far lower than backplane buses like VME or PCI. This hampered the adoption of DCS based architecture by a majority of system designers even though distributed control systems were far more efficient as compared to back plane based industrial automation systems. 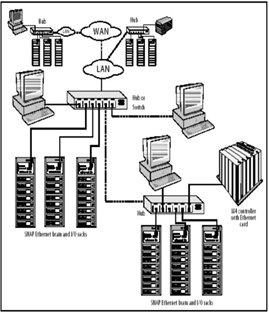 With the evolution of IEEE 1394 specifications, since it's inception in 1995, 1394 has emerged as the only optimum solution for Distributed control systems. With 1394 the concept of all signals converging on the backplane is inverted, since 1394 can bring an adequately fast bus to the signals and the point of control. Though 1394 was conceived and developed as a bus for digital consumer electronic devices, many of its technical features are well suited to advanced control systems.
The features differentiating 1394 from other competing bus technologies for distributed control systems are:
With the 1394.b specifications being frozen, problems with the 1394.a specifications are further resolved, making the choice simpler for designers. The bottlenecks faced with the 1394.a specifications, suitably addressed by the 1394.b specifications are:
1.      Galvanic Isolation: The earlier version of 1394 was susceptible to influence of system level ground fluctuations that could produce unintended data corruption due to limited electrical isolation.
2.      Distance between nodes: The 4.3 meter distance limitation as imposed by 1394.a specifications is no longer a bottleneck with distances to the range of 100 meters possible by 1394.b.
3.      RFI Interference: 1394.b specs. are far more immune to electrical noise fluctuations commonplace in factory environments.

These enhancements over other bus technologies and especially the predominant Ethernet network makes 1394 a robust and pervasive technology for advanced automation control systems.

A structured approach is helpful when considering networking infrastructure for Industrial Automation. Networking is critical for driving any Automation system and networking technology itself must have truly enabling capabilities like the ones provided by 1394. A point by point analysis of all characteristics of a good network clearly indicates this as below:
SUMMARY

Adoption of 1394 technology will provide the Industrial Automation industry to also extend functionality to a broader level. Large corporations continually struggle with managing the plethora of critical business assets across their organizations. Typically the plant-floor machines are separated and disconnected from the rest of the corporation's assets including information technology assets. But managing all these assets together allows the business to function as a unit. The network implementation using 1394 outlined above can bridge the management of mission-critical assets across the organization.

The adoption of the 1394 Multimedia Standard Protocol for Instrument and
Control Applications in February, 2000 laid the foundation for the movement of
Control applications to 1394. Continuing innovations will bring further
convergence of PC based automation software with DSP control modules
running on 1394 networks.

The industrial Automation.community can benefit in many ways by taking a close look at how 1394 has benefited the world of consumer electronic devices. The impact of 1394 on the industrial control field is likely to be as disruptive and revolutionary and will enable new applications to be developed due to the flexibility and improved economics of this new control architecture.

Gaurav Sareen is the Product Manager for Wireline Technologies at Wipro. He manages Intellectual Property portfolios for IEEE 1394, USB and Ethernet. He works closely with the Engineering team and is responsible for Product roadmap development and maintenance.