Many applications use one or more motors operating in parallel at the same desired speed. Using one Variable frequency drive (VFD) to control these multiple motors provides a host of advantages

Many applications use one or more motors operating in parallel at the same desired speed. Using one Variable frequency drive (VFD) to control these multiple motors provides a host of advantages as summarized below. 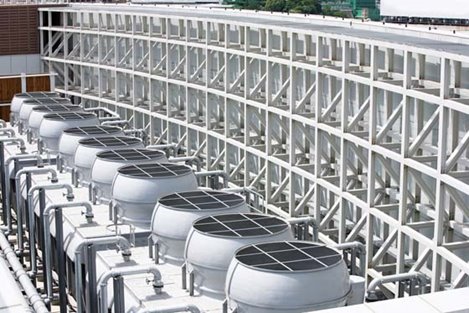 Money is saved because one high horsepower rated VFD is less expensive than multiple low horsepower VFDs. Each VFD requires its own circuit protection, so using one VFD reduces cost in this area as well.

In terms of the motors and connected loads, the footprint can also often be reduced. For example, it may be possible to fit multiple small fans of a smaller size into a confined duct space as opposed to one large fan.

Maintenance time and costs are cut because only one VFD has to be serviced as opposed to multiple smaller VFDs, often of varying sizes. This also reduces inventory stocking requirements. Each motor will be smaller and usually available as on off-the-shelf standard product. Because many of the motors will be identical, spares can be stocked and replaced quickly in a failure.

The overall control system also becomes much simpler. Instead of connecting many VFDs to the main controller, usually a PLC, and synchronizing their operation; only one connection is required. When programming the PLC, only one VFD speed control loop needs to be configured, instead of multiple instances.

Taken in total, the above benefits may justify use of a VFD in applications where using one VFD per motor is cost prohibitive. When this is the case, the application benefits from all of the advantages of operating motors at controlled speeds including reduced energy costs, longer motor life and better operating performance.

But even given these benefits, most VFD installations with multiple motors use one VFD per motor. Why is that?

Design Constraints Multiple conditions must be met when applying one VFD for control of multiple motors. First, each motor must have the same desired operating speed. With one VFD per motor, each motor can be controlled separately and run at a different speed. This is not so when running multiple motors from one VFD.

Second, running multiple motors from one VFD creates a single point of failure. If the VFD fails, then all of the motors connected to it are not usable. Various VFD bypass schemes can be used to overcome this limitation, but these schemes all add cost and complexity to the system.

Although the VFD becomes a single point of failure, motor and connected load reliability actually improve in many applications as there are now multiple smaller motors as opposed to one large motor. If one motor fails, it’s often possible to continue operation with the remaining motors. In these cases, the remaining motors run at a speed controlled by the VFD, and operate the overall system at reduced but often still viable capacity.

What types of applications meet the three specific conditions detailed above? Applications that use dual fans or pumps are good candidates. The VFD can ensure that the two units are operated at the desired speed, and don’t end up fighting each other or having one unit carry more than its design load level. Air handling systems, exhaust/supply fans, make-up air units, recovery wheels and fan arrays are also good candidates for an installation where one VFD controls multiple motors.

Once it’s determined that the application falls within the required specific conditions, the next step is detailed design, where care must be taken to select and apply the right VFD and associated components.

The VFD must be sized properly based on its connected motors. The first step is to sum total connected motor horsepower or full load amps (FLA). Of the two, FLA is the better parameter to use, but it’s sometimes not available. Once this sum is calculated, selection of the VFD based on total horsepower or FLA can be made. The VFD should always be sized equal to or greater than this sum.

Normal VFD operation will enable all of the connected motors to maintain a constant speed, but only if the correct type of motors are used. A standard induction motor tends to slip somewhat with respect to the line frequency as its load varies, so speeds won’t be synchronous. The solution is to use three-phase, inverter-duty synchronous induction motors as this ensures that the motor speeds will remain synchronous with the line frequency.

Unlike with a single motor connected to a VFD, each motor must have its own overload and short circuit protection. When controlling a single motor, a VFD with the right features can often provide short circuit and overload protection to the motor, and may be able to sense an over current situation if the circumstances are right.

But a VFD only senses its total connected load, outputting as many amps as needed up to its current rating. When controlling multiple motors, a single VFD can’t sense which motor is drawing high current, so it can’t provide appropriate overload and over current protection to each individual motor.

For instance, a 50hp/65amp VFD might be controlling four 10hp/14amp motors for a total connected load of 56amps as shown in Figure 1. If one of the motors was overloaded and drawing 22 amps while the other three motors continued to operate normally, it would be difficult to configure the VFD’s protection circuits to sense the overload condition.

Figure 1. Each motor connected to the VFD must have its own short circuit and overload protection.

Overload protection is designed to disconnect the individual motor from the VFD if the motor draws current greater than normal but less then eight times its FLA for a prolonged period of time. This protects the motor and the motor conductors from excessive heating. The most common types of motor overload protection technologies are bimetal and solid state.

With individual motor protection, only the motor that faults is disconnected, and the remaining motors continue to run. This is a must in applications that can’t afford to have the entire system shut down while a single motor is repaired or replaced.

As previously mentioned, a disadvantage of controlling multiple motors is that the VFD becomes a single point of failure for the entire system. This disadvantage can be eliminated by using a bypass circuit as depicted in Figure 2.

Figure 2: This three-contactor bypass arrangement allows the connected motors to continue operation in the event of VFD failure.

With this three-contactor bypass arrangement, the motors can still run if the VFD were to fail, although only at rated speed rather than at a speed controlled by the VFD. The contactors upstream and downstream of the VFD are opened, and the bypass contactor D is closed. This bypasses the VFD and connects all of the motors directly to line power. This arrangement is very common in HVAC applications.

Engineers and companies are constantly looking for simple yet creative methods to optimize performance and design of VFD, motor, and connected load systems. Using a VFD to control multiple motors fits the bill as it saves money, reduces the footprint and simplifies maintenance. From simply using one VFD to control two motors on a make-up air unit, to controlling a large 14 motor fan array on an air handler supply fan with a single VFD—multiple motor configurations make sense in many different applications.

When a single VFD is used to control multiple motors, VFD sizing and selection become more complex unless all of the motors are started simultaneously. With multiple motors connected to one VFD, adding the horsepower of each to obtain a total load and selecting the VFD accordingly may not be sufficient depending on operating conditions.

One of more motors can’t be started up while one or more motors are already running unless the selected drive is sufficiently oversized. To illustrate this point, consider the following example with three 460 VAC motors connected to one VFD.

Two of the motors are rated at 5 HP with a full load amp (FLA) rating of 6.2 amps. The third motor is rated at 10 HP with an FLA of 14 amps. If all motors are accelerated, decelerated and run in unison—the sum of the connected motor FLA allows use of a 20 HP drive. But if it were necessary to accelerate and run the 5 HP motors and then start the 10 HP, the sum of the FLA would have to be recalculated.

The FLA for each of the 5 HP motors would be used in the calculations, but the locked rotor amps (LRA) for the 10 HP would have to be taken into account. The LRA is the amount of current drawn by a motor at startup.

Because the 10 HP motor wouldn’t be accelerated from zero frequency and voltage to its running condition, it would look at the drive as a fixed voltage/frequency line starter and would require its full LRA rating to quickly accelerate to the drive’s output frequency.