In part 1 of the Beginner's PLC Overview, we talked about what PLCs are, their history, and how they work. This article will get a little deeper into the PLC's Central Processing Unit (CPU).

In part 1 of the “Beginner’s PLC Overview”, I gave an introduction to PLCs. We talked about what PLCs are, their history, and how they work. If you haven’t read it yet be sure to start there: Beginner’s PLC Overview Part 1 of 4: Introduction to PLCs. After you’ve read that, you’re ready to begin this post where we will get a little deeper into the PLC ‘s Central Processing Unit (CPU) by using the human brain as an analogy and then we will briefly cover some examples of Allen-Bradley PLC/PAC processors.

NOTE: In the industrial automation realm it is common to use the terms processor, CPU or controller interchangeably. So don’t get confused when I do that!

What is a PLC Processor?

You should remember from part 1 that most of the components of a PLC system can be categorized as one of the following: We discussed how the three components above work together to take inputs, perform logic on the inputs and then activate/deactivate outputs based on the combination of input status and programming logic. In this post we are zooming in on the CPU, where the PLC memory and logic are found.

PLCs and the Human Brain

The CPU is where the PLC program is stored. This customized program is created by a developer to automate the machine(s) used in the plant or process facility. In Part 1, in the dishwasher example, we looked at how the program logic might look in a dishwasher CPU. The programmed logic detects various input states and activates/deactivates various output actions. The programmed logic in a PLC CPU is similar to our dishwasher example, but of course depends upon the application. The PLC CPU logic can also be compared to the brain in the way the brain takes input signals (sight, feel, smell, taste, sound) and produces output actions (stepping, reaching, gripping, talking, etc.) based on the brain’s “programming”. Obviously, the analogy breaks down at some point because the logic or “programming” in the human brain is not fixed and is constantly adapting to new experiences and teaching. We will look at PLC programming with Ladder Logic in more detail in Part 4 of this series.

Let’s use an example. Our brain’s logic might look something like this: Although the human brain is much more complex, powerful and adaptable than a PLC, you can see the similarities between the PLC and the human control system. Specifically, you should be able to see the correlation between the human brain and the PLC brain; the CPU. Notice how PLCs can be programmed to work with mechanical equipment to perform many tasks that would otherwise have to be done manually by humans.

Ok, now that we have discussed in some detail what the PLC CPU is and how it functions, let’s take a quick look at some examples of real PLC/PAC processors from Allen-Bradley.

The intent of this blog series is to introduce you to what PLCs are and the purpose of the various components in a PLC. As we discussed in Part 1, there are differences between PLCs and PACs, and the definitions of each vary from person to person. However, most of the concepts in this series apply to both PLCs and PACs. So, in addition to the well-known PLC processors mentioned below we will also look at two of Allen-Bradley’s most well known PAC processors.

The PLC-5 family has been around since 1986 and was Rockwell’s flagship PLC system until the late 90’s. The PLC-5 is a powerful controller housed in a heavy-duty metal enclosure. It has built-in communication adapters on the controller to allow it to communicate with remote input and output modules. The type of built-in communication adapters on the PLC-5 vary depending on the processor model. These communication adapters would be ControlNet, EtherNet/IP or DH+/Remote I/O. The PLC-5 family is programmed with RSLogix 5. Rockwell Automation/Allen-Bradley is phasing out the PLC-5 since the ControlLogix PAC has taken it’s place with much more power, flexibility and a much more user-friendly programming software. 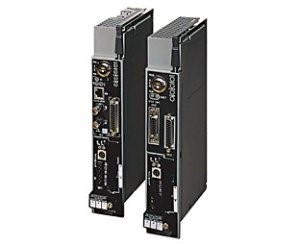 NOTE: According to Rockwell Automation’s website, the PLC-5 control system will be completely discontinued in June of 2017. Therefore, many plants are scrambling to get their systems migrated to the ControlLogix Platform

The SLC 500 family was introduced in 1991 and was intended to be a more economical solution than the PLC-5 that could be used for smaller or less complex applications. With the SLC 500 controllers a slightly modified programming software called RSLogix 500 which also used for their MicroLogix PLC family. I am not expert on the differences between RSLoigx 5 and 5000 but I can say that I have not noticed a significant difference in the user experience between the two.The SLC 500 was a good little PLC system for medium to smaller applications. Even with today’s standards it performs very well for most applications, but it too is being phased out in favor of newer technology. 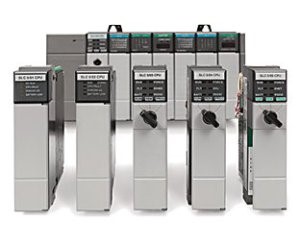 Although the SLC 500 controllers have not been discontinued, many of the I/O and communication modules in the family have been. It’s only a matter of time before the SLC 500 family is completely discontinued like the PLC-5.

The ControlLogix family was introduced in 1997. It is still Rockwell’s flagship control system and although it has undergone several version changes and upgrades over the years, it is still basically the same platform. The ControlLogix controllers are very powerful processors and are far more configurable than all the other A-B PLCs. Even the base level processor 1756-L71 is more powerful and has more program and I/O capacity than the largest PLC-5 processor. One of the unique features of ControlLogix is that a processor can be placed in any slot of the the chassis and there can be multiple processors in one chassis. The ControlLogix processors are programmed with RSLogix 5000 (now Studio 5000 Logix Designer). 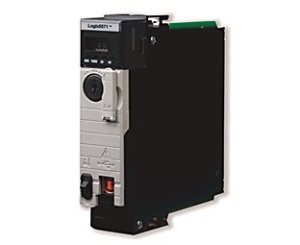 The CompactLogix system was released in the early 2000’s with a similar purpose to the older SLC 500: to be a more affordable solution for simpler applications that did not require the advanced capabilities of the more expensive ControlLogix system. The CompactLogix has taken the place of SLC 500 as the cost-effective small control system of choice. CompactLogix processors are programmed with RSLogix 5000/Studio 5000 Logix Designer. This is good news for A-B PLC programmers because we only need to be familiar with one software platform to program either the CompactLogix or ControlLogix systems.There are several types of CompactLogix Controllers, including several recently added controllers. Some of the new controllers have some basic built-in I/O for the very simple applications where you just want a small processor and some basic I/O all in one package. All the CompactLogix processors have built-in Ethernet cards which eliminates the cost of the external Ethernet modules needed for ControlLogix processors. 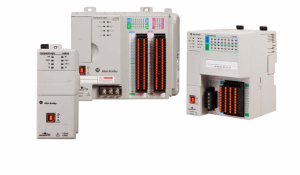 Ok, so you made it this far. Good work! There is a lot to learn about PLCs and sometimes it can feel like information-overload as you get into it. There will always be more to learn but at this point in the series you should have a better understanding of what the PLC processor does, be able to see what the human brain can teach us about PLC processors and be familiar with some of the most popular PLC/PAC processors from Rockwell/A-B.

Was this helpful? Do you have any questions? As always, I love hearing from you. Let me know what you think at stephen@myplctraining.com. And if you haven’t already, Click Here to Subscribe to my email list for more helpful PLC/industrial automation content!

P.S. Sorry if from now on when people talk about dishwashers and brains you just want to tell people about PLCs! Actually I’m not sorry. Welcome to nerd life.