What is High Performance Computing?

Most HPC systems are built around a single or dual CPU and one or more Graphics Processing Unit (GPU).  The GPUs play a critical role in HPC performance because they can take on the most extreme computation, leaving the CPU to do the behind the scenes work of running the operating system and applications.

CPUs are made up from several cores that are utilized for serial processing.  In contrast, GPUs contain thousands of small cores that are designed for processing threaded data in a large scale parallel architecture.  Because each of these cores can process a small amount of work in parallel with the thousands of other cores at the same time, complex mathematical calculations can be broken down, solved and then recombined more efficiently than by relying on a serial multi-core CPU.  When combined with software written to take advantage of parallel processing, performance increases over serial processing can range anywhere from 12x to 40x. 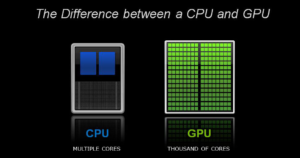 CORE differences between a CPU and GPU: Each GPU can provide hundreds or even thousands more cores than a typical multi-core processor.

What Kinds of Applications Require HPCs?

Over the years, there has been a growing need from the military for high performance computing (HPC) platforms.  In the past, data collection activities that generate petabytes of data such as satellite imaging, UAV sensor feeds as example would require processing by supercomputers would require the data to be physically transported to these systems or would require having the data processed locally by slower computers that could take hours to days for data analysis.  By suppling parallel processing techniques for solving complex computational problems in a ruggedized platform the HPC computer has revolutionized data capture and analysis for today’s warfighter.

Using specifically designed software and a HPC system it is possible to map large areas in seconds rather than days.  The system, which would map the territory targeted and the spatial extent between buildings, roads and terrain.  Mapping large areas such as cities involves advanced algorithms capable of extracting, representing, modeling, and interpreting satellite image features.  The parallel-processing capability of a GPU based system allows algorithms to process imagery at dramatic speeds.  As an example, today’s GPU based system and software can use satellite images to map a 200 square mile city in detail, including all buildings and roads in less than 20 seconds.

In the case of video processing, an extremely fast dual-CPU computer can only analyze a single HD (1080p) video stream at about 15 frames per second.  By adding just one NVIDIA Tesla GPU to the server platform, will accelerate the video processing software by up to 12 times.  This number can also be increased by adding additional GPUs to a platform.  This boost in parallel processing power can reduce the time required to analyze 24 hours of HD (1080p) video to under one hour.  This enables the military to identify security threats or targets of interest at a much faster rate with more accuracy.

Additionally, HPC systems can be utilized for image-enhancement applications that reveal previously hidden data in satellite or UAV images.  Parallel processing allows for the use real-time image stabilization and enhancement techniques to clean up video feeds.   Having these computers deployed in the field, versus having to transmit or transport data back to remote locations for further analysis, adds a new dimension when information can be processed and understood in real time.

The HPC system utilizes software for image enhancements such as orthorectification (which modifies the image for topographic relief and corrects for both the distortion of the lenses and camera tilt) to provide a more accurate representation of the Earth’s surface.  Another technology is “pan-sharpening” which generates high quality high resolution images by combining high resolution black and white images with medium resolution color images.

Orthorectification and pan-sharpening are highly intense mathematical processes and require super computer type processing power.  With just CPU’s alone such processes could take several minutes to hours to complete.   A HPC/GPU solution can process these algorithms up to 12x faster for orthorectification and up to 40x faster for processing pan sharpening over a CPU-only based system.

SWaP is a military acronym for (Size, Weight and Power).  These are very important product features for today’s military.   By introducing the latest GPU technologies into a ruggedized platform there are several SWaP advantages as noted below.

A single GPU server can process and analyze as much complex video and imaging data as 12 dual CPU servers!  This performance benefit can greatly reduce the size of the overall system platform.  Next, using the same comparison, a fully integrated 2U with single GPU system could be estimated to weigh under 30lbs, while the stack of twelve systems reducing the overall platform weight by 270lbs. Lastly, consider a single 2U system with a single GPU to have a power draw of roughly 500W.  In the 12-system scenario would have a power draw in the 4,000W range saving over 3,500W in overall power draw.  When comparing size, weight and power advantages, an HPC configuration is the clear winner.

As each customer’s project is unique and offers different challenges, Chassis Plans provides a required platform solution for each specific application. To deploy an HPC in a harsh environment, there are several areas from a mechanical and thermal standpoint that Chassis Plans will enhance.  This process begins by understanding a customer’s environmental requirements which could range from ground based, vehicle, shipboard to aircraft applications – each requiring its own unique requirements.

Chassis Plans is now part of the Aeronautics Group of companies and is a manufacturer of computers, LCD displays, storage arrays that are designed and assembled in the USA for Military and Industrial applications. Founded in 1997, CP specializes in Rugged and Custom Computers and LCD technologies serving the DoD and Industrial markets.