Can Manufacturers Compete When Trapped in Existing Automation Architectures?

Manufacturing companies are becoming more aware of the need to modernize production methods and automation to compete globally, but many still find themselves stuck in a sunk investment trap.

Manufacturing companies are becoming more aware of the need to modernize production methods and automation to compete globally, but many still find themselves stuck in a sunk investment trap. This focus on past investment could ruin their production competitiveness and jeopardize their future.  Investment in industrial automation technology should be a strategic business decision, within the framework of world manufacturing competition, not based on existing sunk costs.

The digital revolution, which works to improve the performance of manufacturing and process business, is accelerating the digitization and integration from sensor to enterprise, supply chain,  and cloud applications.  Yet, in our industry, we see that existing industrial and process automation systems have not embraced new technologies at the same rate as other business systems, and this has created a need for investment new manufacturing automation solutions.

Organizational competitiveness and flexibility can only be accomplished by leveraging advanced technologies, centering on automation, in order to enable a successful transition. Germany’s Industry 4.0 initiative was the first effort to help manufacturers enable this transition, and the effort has since ignited worldwide initiatives in China, Japan and India.

Developing economies logically have a key advantage in this area, since they are typically not burdened with legacy automation system and machine investments.  Taking advantage of the new technologies and initiatives have allowed them to leapfrog organizations, who are attached to older expensive legacy equipment.  This makes an analysis of sunk cost versus new investment a more compelling task.

As mentioned, it is the existing automation system investments that see many manufacturers stuck in the sunk cost trap. The sunk cost trap phenomenon occurs when contemporary accounting methods, and a lack of forward-thinking business strategy, lock manufacturers into existing technology when there are major technology advancements and investments required to be competitive.   For example, the depreciation schedules on automation systems in many cases are the same as production equipment, think motors, pumps, punch presses etc.   Where this may have been appropriate in the past, we see the schedule increasingly warped with the rapid changes in technology, to the point that manufacturing success factors have significantly changed.

Major shifts in technology have created debates which revolve around revolution versus evolution.  I find that this debate needs to be clearly understood, in order to make intelligent long-term decisions to be competitive, and have explored this in several articles.

On the one hand, evolutionary investments into existing manufacturing and production automation systems may be a example of “throwing good money after bad,” which can have devastating competitive consequences, particularly with the influx of new competitive manufacturers who can leverage the latest technologies without squarely facing sunk cost trade-offs.

On the other hand, the sunk cost reasoning is that further investments or commitments to existing automation system architectures are justified, because the resources already invested will be lost if not perpetuated.  Yet, the sunk cost fallacy is a mistake in reasoning, in which the sunk costs drive decisions without considering the future factors, such as competitive manufacturing environment, lost future business, and opportunities for accelerated growth.  The sunk cost fallacy becomes more dangerous as users further invest in evolution of existing automation systems.

Racks of relays were replaced by PLCs simplifying automation and increasing flexibility and broadening applications.

This isn’t a new phenomenon either. The shift from mainframe computers to PCs, in business computing, is a recent example of this phenomenon.  Early in my career, a company I worked for was at this juncture. There was bitter fighting between the existing “data processing” mainframe proponents and those promoting PCs.  As history has noted, eventually PC architectures won out, democratizing computing, and increasing productivity.

More specific to automation and manufacturing, we turn to the example of PLCs. Today, it seems obvious to use PLCs rather than large racks of relays to automate production lines, and DCS to automate processes rather than manual and pneumatic controls.  Yet at the time of these transitions, there were these same arguments and resistance to applying the new technology. 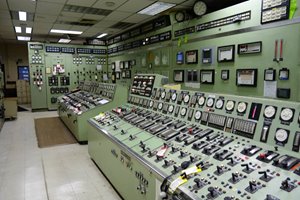 Large control consoles with many dedicated displays and single-loop controllers were replaced with DCS simplifying automation and increasing flexibility and broadening applications.

Obviously, the decision process is not simple and requires realistic analysis, coupled with vision, as the sunk cost bias can be a big deterrent to change.

Today, we see automation vendors that can be either a great asset or a liability in this decision-making process. Vendors with a large installed base in a user’s facilities, for example, generally prefer not to rock the boat and avoid the major competition created by a major change. This is why users need to do independent research, looking beyond existing suppliers, and clearly set manufacturing, productivity, and quality goals before they start seeking solutions.

Further complicating this dilemma is the fact that the industrial automation industry has not fully embraced the open architecture systems that have accelerated capabilities, both in business and personal lives. There are organizations working to change this. The Open Process Automation Forum initiative is one such group working to facilitate change.  Don Bartusiak, Chief Engineer, Process Control ExxonMobil Research & Engineering, expressed his experience with user frustration at the lack of open industrial automation application ecosystems. “Just think about how much value you’re getting from all the third-party apps that you can load on your smartphone,” argued Bartusiak, “We can’t do anything like that in our world.”  He further described how the closed ecosystems in today’s industrial automation systems have been forcing users to make significant compromises on projects.   This is because closed ecosystems limit the ability of users to choose the ‘best’ solution, instead boxing the users in to a scenario where they can choose only between those applications which are compatible within their incumbent supplier.  In contrast, smartphone users can pick from a wide range of competing applications to find the best fit to the requirements they need.   Even more poignantly, Bartusiak noted that, many times, users cannot write automation & control applications once and directly run it on any vendor systems. In closed ecosystems the application might have to be written many times depending on the system.  To emphasize his point, Bartusiak asked these questions:

The industrial automation industry has dramatically lagged in the adoption of technology, and these closed ecosystems have been a major cause of this hesitation. Many vendors have partner programs and interfaces that are promoted as “open”, but these are highly-gated, bureaucratically controlled, closed ecosystems, which limit participants and solutions.  This situation can still get worse, too, without a strong open standards approach. Many industrial automation companies are introducing Internet of Things (IoT) and cloud architectures that propose to have their own gated ecosystems for third-party applications, with each closed architecture continuing to muddle the industry.

The task at hand for today’s manufacturer is to create the future vision of the results that their company desires to achieve and independently seek superior technology in order to build those superior manufacturing and production processes to grow and prosper.

“The best way to predict the future is to to create it.”