During a January preview for the event, over 120 journalists, including yours truly, gathered for presentations and discussions from the Hannover Messe team, and over 40 exhibitors, expanding on the topics and technologies that so many will experience

After getting a preview of what is on tap for HANNOVER MESSE 2019, it appears that attendees are in for another exciting event. During a January preview for the event, over 120 journalists, including yours truly, gathered for presentations and discussions from the Hannover Messe team, and over 40 exhibitors, expanding on the topics and technologies that so many will experience.   Onuora Ogbukagu - the Corporate Spokesman and Director Marketing & Communications Industry, Energy, Logistics, for Deutsche Messe AG in Hannover - opened that Preview Event sharing topics this year which include digitalization, industrial automation, machine learning, artificial intelligence, and energy solutions.

Dr. Jochen Köckler, CEO, Deutsche Messe AG, followed up in his overview of HANNOVER MESSE 2019 trends and topics by noting, “The 72nd year of Hannover Messe and it is booming with more than  6, 500 exhibitors from more than 75 countries is truly an international trade fair.”   The key topics which were laid out for Hannover Messe 2019 include :

Köckler also highlighted 2019 keynote themes for these topics including integrated industry, Industry 4.0, artificial intelligence/machine learning, and 5G for Industry.  These themes are supported by many forums which have leaned on industry and technology experts to provide valuable information for today’s professionals. These efforts include: 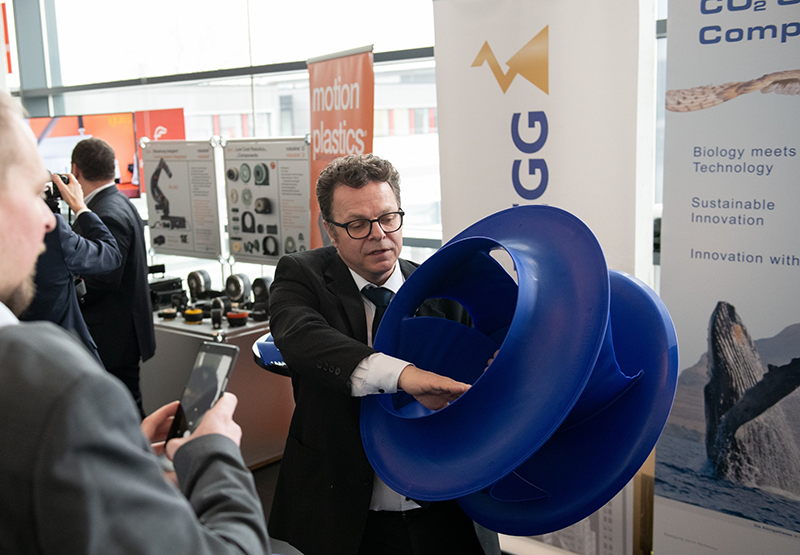 At every event, Hannover Fair shares its spotlight with a chosen Partner Country. For the 2019 even, this country is  Sweden.At the preview event, S.E. Per Thöresson, Ambassador of the Kingdom of Sweden to Berlin, began his address to the group by noting their status as the smallest partner county so far, “Hannover Messe is an excellent opportunity to really underline the importance of the German and Swedish relationship, we of course want to establish new contacts,”  Ambassador Thöresson explained. He further described how they are teaming and collaborating with government, industry, and research institutes are collaborating to have a leading innovation and digitalization position.  During Hannover Fair, Sweden is especially looking forward forward to sharing, learning, and broadening the relationship. 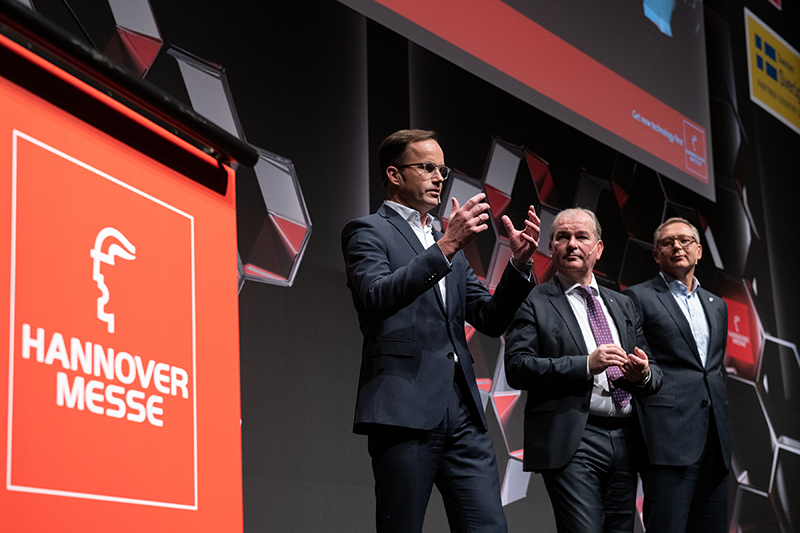 He discussed, in particular, the Swedish-German innovation partnership which was initiated 2017 to focus on innovation efforts including:

Under the heading of "Sweden Co-Lab", Swedish companies will present themselves as providers of smart industry solutions. "Sweden Co-Lab" combines the two key concepts of co-creation and innovation, underscoring Sweden’s role as a think tank for leading-edge technologies.  Ambassador Thöresson described how Sweden is continuing to work to be a hotspot for innovations, research, testbeds and trends which together pave the way for future-oriented concepts – a phenomenon that applies to both the public and private sector, including SMEs (Small Medium Enterprises), large corporations and startups.

The main exhibition stand for Partner Country Sweden will be branded the "Sweden Co-Lab pavilion", and will serve as a focal point during the five-day fair and providing a point of contact for the media as well as for representatives from government, business and associations. The "Sweden Co-Lab pavilion" in Hall 27, Stand H30 will showcase Sweden and Swedish companies as global leaders in smart industry, automation, digitization, IoT and AI, with a value creation chain ranging from R&D and smart production to sales and recycling.

One of the exhibiting business leaders that spoke at the event was Jürgen von Hollen, the president of Universal Robots, in Denmark. Von Hollen presented perspectives on empowering people through technology by noting the constant ongoing change in today’s industrial ecosystem, from market demands and shifts in employment environments, to innovative manufacturing technologies & methods, and rapid technological progress.  “If we look at 2018 and 2019 we have some other challenges going on… it is very difficult to forecast what is going to happen in the market,” observed von Hollen, “There are many things in the market that are very unstable and very volatile, for a company trying to deal with the situation there is risk and uncertainty. We are moving into a situation where flexibility is required.”

He described how this flexibility is essential in order for a business to quickly react to the changing business and global factors.  The end goal is for a company to position itself in a manner to be proactive to take advantage of the opportunities that the digital age has created. One example of this effort, as Jürgen von Hollen shared, was Univeral Robots prominent focus on human empowerment.  “In a world of change and risk and uncertainty it’s actually the human element that makes a difference,” emphasized von Hollen, “Flexibility did does not come from a robot, I can promise you that”.  He believes that humans can make the difference in this new environment.  One reason for this is that the true differentiator that makes technology valuable is ease-of-use, or as he explained “taking something complex like robotics and make it simple to use as possible.”  This results in effective tools people can use to accomplish productivity and efficiency gains in a facility. 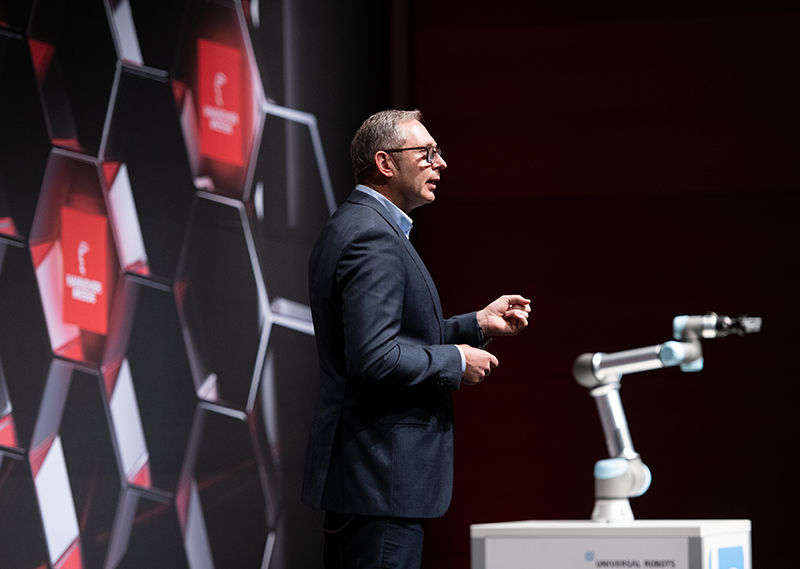 Jürgen von Hollen , “Many companies bring look outside of their businesses to optimize, bringing in consultants”  “I can tell you is the best consultants are the people on the production line every day for the last 10 to 15 years, give them the tools and technology they can use to improve productivity and flexibility.”

There is a growing trend that companies cannot find enough people to fill the higher skilled jobs, yet technology is mainly an enabler to make people more effective and productive. “The human needs to be at the core of production, leveraging the creativity of the human,” urged van Hollen. “Many companies bring look outside of their businesses to optimize, bringing in consultants; I can tell you, the best consultants are the people [who have been] on the production line every day for the last 10 to 15 years”. He advocated that it was essential to give these employees the tools and technology they can use to improve productivity and flexibility.

In conclusion of his preview presentation, van Hollen described how competition is global with all players leveraging technology and there is a window of opportunity.  “It’s not the time to be a last mover, this is not the time to be a last mover, your position and opportunity are enabled by technology,” he warned.  In the past, the large company had a significant advantage over small and medium companies with automation engineers, capital, and resources that small companies did not have.   In this current era, properly implemented new technologies are removing the barriers for these small and medium size companies, enabling them to implement superior automation and compete. 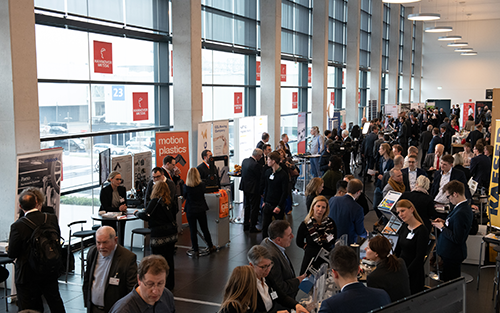 40 Exhibitors and over 120 journalists from around the world attended the Hannover Messe 2019 preview.

Bill Lydon brings more than 10 years of writing and editing expertise to Automation.com, plus more than 25 years of experience designing and applying technology in the automation and controls industry. Lydon started his career as a designer of computer-based machine tool controls; in other positions, he applied programmable logic controllers (PLCs) and process control technology. In addition to working at various large companies (e.g., Sundstrand, Johnson Controls, and Wago), Lydon served a two-year stint as part of a five-person task group, where he designed controls, automation systems, and software for chiller and boiler plant optimization. He was also a product manager for a multimillion-dollar controls and automation product line and president of an industrial control software company.