In early 2021, threat actors conducted a series of attacks using the Cring ransomware. These attacks were mentioned by Swisscom CSIRT, but it remained unclear how the ransomware infects an organization’s network. An incident investigation conducted by Kaspersky ICS CERT experts at one of the attacked enterprises revealed that attacks by Cring ransomware exploit a vulnerability in VPN servers.

In early 2021, threat actors conducted a series of attacks using the Cring ransomware. These attacks were mentioned by Swisscom CSIRT, but it remained unclear how the ransomware infects an organization’s network. An incident investigation conducted by Kaspersky ICS CERT experts at one of the attacked enterprises revealed that attacks by Cring ransomware exploit a vulnerability in VPN servers. Victims of these attacks include industrial enterprises in European countries. At least in one case, an attack by the ransomware resulted in a temporary shutdown of a production site.

In 2019, the CVE-2018-13379 vulnerability in Fortigate VPN servers became known. The issue was addressed and patched, however, not all the devices were updated–and offers to buy a ready-made list containing IP addresses of internet-facing vulnerable devices started appearing on dark web forums beginning autumn 2020. With this, an unauthenticated attacker can connect to the appliance through the internet and remotely access the session file, which contains the username and password stored in clear text.

Incident response, conducted by Kaspersky ICS CERT experts, has revealed that in the series of Cring ransomware attacks, the threat actor exploited the CVE-2018-13379 vulnerability to gain access to the enterprise’s network.

Investigation showed that, some time prior to the main phase of the operation, the attackers performed test connections to the VPN Gateway, apparently in order to make sure that the stolen user credentials for the VPN were still valid.

On the attack day, after gaining access to the first system on the enterprise network, the attackers used the Mimikatz utility to that system. The utility was used to steal the account credentials of Windows users who had previously logged in to the compromised system. The attackers then were lucky to compromise the domain administrator account, after which they started propagating to other systems on the organization’s network abusing the fact the administrator had rights to access all systems on the network with the single user account.

After doing reconnaissance and gaining control of the systems valuable for the industrial enterprise operations, the attackers downloaded and launched the Cring ransomware. 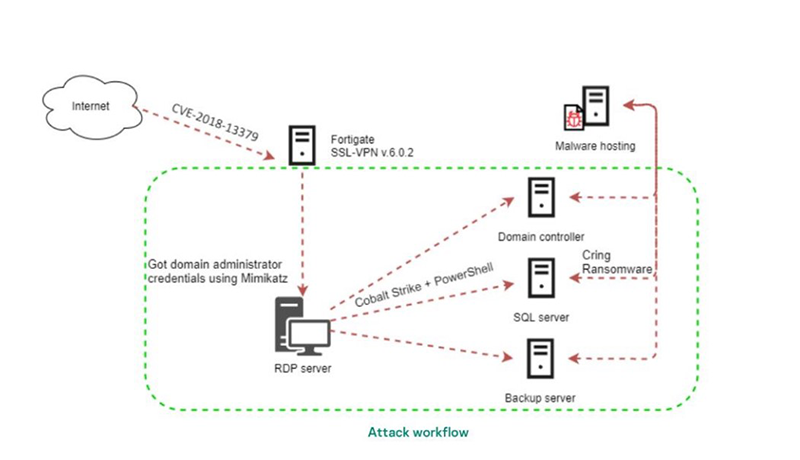 According to experts, the lack of timely database updates for the security solution used on attacked systems also played a key role, preventing the solution from detecting and blocking the threat. It should also be noted that some components of the antivirus solution were disabled, further reducing the quality of protection.

"Various details of the attack indicate that the attackers had carefully analyzed the infrastructure of the targeted organization and prepared their own infrastructure and toolset based on the information collected at the reconnaissance stage," commented Vyacheslav Kopeytsev, security expert, ICS CERT at Kaspersky. "For example, the host server for the malware from which the Cring ransomware was downloaded had infiltration by IP address enabled and only responded to requests from several European countries. The attackers’ scripts disguised the activity of the malware as an operation by the enterprise’s antivirus solution and terminated the processes carried out by database servers (Microsoft SQL Server) and backup systems (Veeam) that were used on systems selected for encryption. An analysis of the attackers’ activity demonstrates that, based on the results of the reconnaissance performed on the attacked organization’s network, they chose to encrypt those servers which the attackers believed would cause the greatest damage to the enterprise’s operations if lost."

Read more about the investigation on the Kaspersky ICS CERT website.

To keep systems protected from this threat, Kaspersky experts recommend:

Kaspersky is a global cybersecurity and digital privacy company founded in 1997. Kaspersky’s deep threat intelligence and security expertise is constantly transforming into innovative security solutions and services to protect businesses, critical infrastructure, governments and consumers around the globe. The company’s comprehensive security portfolio includes leading endpoint protection and a number of specialized security solutions and services to fight sophisticated and evolving digital threats. Over 400 million users are protected by Kaspersky technologies and we help 240,000 corporate clients protect what matters most to them.