Why Isn’t Everyone Using AI?

Excitement surrounding the use is high in some sectors but not all.  “Everyone” keeps thinking Artificial Intelligence is "the next big thing," but what will it take to get there?

If you pay attention, even remotely, to tech news, you cannot avoid hearing about Artificial Intelligence (AI). It's everywhere! It dominates articles, events, podcasts, discussion boards, videos… you name it.  I believe this is because of a combination of two notions:

At its core, AI is basically the combination of techniques, practices and technologies designed to mimic the function of the human mind. This results in a system that is capable of self-learning, self-evolving and self-improvement. The idea of artificial intelligence isn’t new. In fact, it has been around since ancient times where people's imaginations dreamt up ideas of "beings" capable of intelligent decision-making controlled by a "master craftsman." It's only been the past decade or so where the fantasy of AI has become palpable, understandable and capable of truly being utilized. IBM's Deep Blue supercomputer in 1997 was famously known for beating Chess Grandmaster Gary Kasparov using early forms of AI. Nearly 15 years later in 2011, IBM used the Watson computer system on Jeopardy! to showcase their improvements. In 2020, we live in a world where "Deep Fakes" are shockingly easy to produce. No matter how you look at It, technology and ingenuity have led this charge and brought us to 2021 where AI is on everyone’s minds. And why wouldn't it be? The promises of AI are powerful, inspiring and ever growing.

According to the Center for Data Innovation, in a 2016 article called "The Promise of Artificial Intelligence," the technology will fundamentally change our lives through seven primary applications: 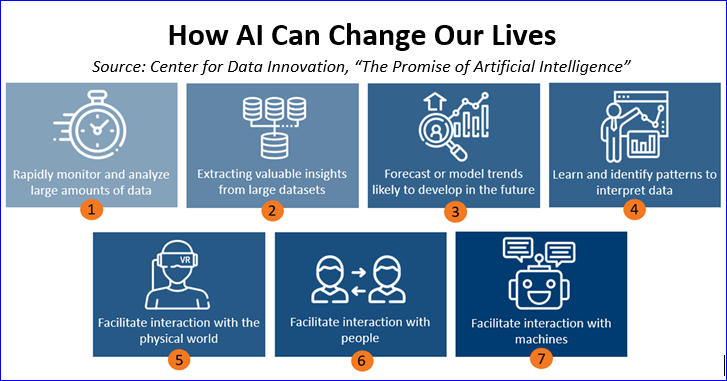 Any one of these applications would have tremendous positive impacts on reducing administrative managerial work, improving decision-making, reducing operational costs, or reducing waste. With all these universal applications and clearly understood benefits, the writing appears to be on the wall: AI is the wave of the future and if you aren't using or planning on using AI soon - you'll be history! Software, platforms, and technologies are already out there, yet adoption appears to be slow. Why is that?

Financial justification and benefits analysis seem to be a no-brainer, yet no one is out rushing to make improvements. Why is that?

The intent of this article is not to go into the details of AI, but rather attempt to answer one simple question: If AI is so awesome, why isn't everyone using it?

State of the AI industry

Surprisingly, market research back in 2015 on AI was far and few between, so unfortunately, it's hard to make useful prediction comparisons over time. One 2016 study by UBS pegged the global AI industry at roughly $5 Billion in 2015 with plans to grow to around $120-$180 Billion by 2020. Today, there are many more market studies related to AI, but none of them put the industry close to even the low end of $120 Billion that UBS predicted.  Grandview Insights indicates AI was less than $40 billion in 2019, but projects it to grow to around $740 Billion by 2027, representing a 42% CAGR. So, although AI has been steadily growing it seems like we keep predicting this massive growth that doesn't happen.  Growth is always in the "near future."  But, when that "near future" comes around, it hasn't yet happened.

According to a 2018 study by McKinsey, only 21% of companies say their organization have embedded AI in several parts of the business, and barely 3% of large firms have integrated AI across their full enterprise workflows. For such an exciting technological advancement in how we live our lives, those numbers aren't very impressive.

Electricity & the Internet: A similar story

In 1893, the world was mesmerized by the infamous illumination of Chicago during their World’s Fair by President Grover Cleveland simply pushing a button. The entire world was inspired and captivated, fully believing electricity would change everything. The problem was - no one really knew how. According to the New York Times, it took nearly 30 years until 50% of U.S. homes adopted the technology, and roughly another 30 years until close to 100% adoption. In 1989, the World Wide Web (www) was invented with a similar story, albeit with faster adoption. According to Pew Research, it took until 1995 to get 14% of U.S. adults to use the internet. The same study showed that by 2014, there was surprisingly only a 87% adoption rate. Living in 2021, it is hard to image life without the internet as a necessity, let alone electricity.  Imagine trying to work from home during a pandemic with no electricity and no internet….Good luck!

Both of these technologies today are considered a utility, something necessary to allow other things to function.  When rapid growth by companies occurred as a result of these utilities, they didn’t attribute their success to electricity or the internet. Even companies like General Electric, with electricity in the name, weren’t promoting their products under the slogan "look what electricity can do for you." Rather, GE, along with other successful companies, took advantage of the utility of electricity to create a bunch of products that solved people's needs, such as the light bulb, the washer and dryer, the refrigerator, and the TV, to name a few. The point is:  Electricity by itself was too vague and intangible. It was the products created that take advantage of electricity that changed the world and drove recognizable benefits to the way we live our lives. More than 100 years later, it's impossible to imagine a life without electricity. It is used to support nearly everything we do and everything we create (from a manufacturing perspective). The same can also be said for the internet.

I doubt there is anyone out there who would bet against AI being our future.  The question isn't "If?", but rather "When?" And more specific to business leaders, the question becomes "Are you going to be a pioneer? Or a laggard?" AI will inevitably be used to assist, offset and even replace tasks we do today.   Just like the internet and electricity did many years ago.  AI will permeate every part of our personal and professional lives.  It will be used to help us grow our businesses and eventually be used in nearly every electronic product companies make. There is no point in fighting it or resisting it, if you do you'll be history!

Moving forward: How do we proceed?

So, what can we do today to avoid falling behind?  The answer might be surprisingly simple in concept, yet require a huge concerted effort to pull off effectively. You don't need to go out and do tons of research on AI technology, understand the details of how it works, investigate all the existing platforms, or even launch a bunch of pilot projects. Instead, you, along with everyone in your entire company, need to change the way you think.   You need to start every decision process with the idea that there is this "thing" (artificial intelligence) already out there that is smarter, faster, more accurate and more reliable than you in making that decision. By letting that guide your thought process, you will automatically start to include the idea of AI into everything you do, everything you decide, and every action you take. You will end up identifying and capitalizing on the "appliances" (to tie back to the electricity analogy), that AI allows for, rather than thinking about AI itself. And going one step further, if your company makes electronics of any kind, your product development cycle will naturally start to include AI into the very things you create!

You will notice that this is much different than the traditional technology adoption model, where you either look for a new product on the market that can solve your existing problem or where you discover a new product can make an incremental improvement on something you already have/do. No, AI is far more fundamental and pervasive.  If it is treated like a "product," it will be siloed, underutilized, and haphazardly applied. It won't ever be fully utilized in a way that are necessary to transform the entire foundation of a company to a new level.

Let AI channel your left brain's creative tendencies to get you to think differently.  AI is here to stay. Don't be a laggard!

Jeff Winter is the senior director of strategy and marketing at Grantek Systems Integration, where he manages of team of technology and industry vertical focused practice leads that support Industry 4.0 and digital transformation. With more than 15 years of experience working for different industrial automation product and solution providers, Jeff has a unique ability to simplify and communicate complex concepts to a wide range of audiences, educating and inspiring people from the shop floor up to the executive board room. As part of his experience, Jeff is also very active in the community of Industry 4.0. He currently is a part of the leadership committee of the Smart Manufacturing & IIoT Division of ISA (International Society of Automation), a contributor to IEC (International Electrotechnical Commission) as a member of TC 65, Board of directors with MESA (Manufacturing Enterprise Solutions Association) and Benchmarking chair with CSIA (Control System Integrators Association).