It is important to note a focus on automotive applications, since adoption of SPE there creates high-volume, driving down the costs of electronics, cabling and more.  This is a key reason for the adoption of CAN (Controller Area Network) technology for industrial control and automaton with integrated circuits. CAN was originally developed for the automotive industry.   Using SPE single twisted pair cabling allows manufacturers to gain the advantage of  high data rates while reducing the overall weight of the car. 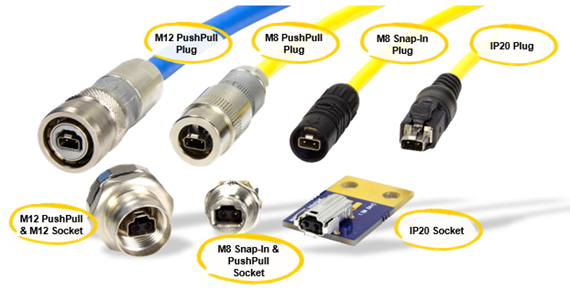 Harting described a range of connectors that conform to SPE standards.

Efficiently driving the Internet Protocol (IP) to industrial edge devices—including sensors, actuators, vision, robots, controllers, contactors, and drives—enables industrial automation to leverage the wave of new IoT technologies and standards.  The Internet Protocol is the principal communications protocol for relaying datagrams across network boundaries.  IP defines packet structures that encapsulate the data to be delivered. It also defines addressing methods that are used to label the datagram with source and destination information.

The Power over DataLines (PoDL) feature of the specifications provide a way to power remote devices.  The specification allows for 12-, 24-, and 48-volt operation; 12 volt is convenient for battery-powered and mobile applications, while 24 volt is a common voltage for control panels and controllers.

Single Pair Ethernet is the basis for the Advanced Physical Layer (APL) being developed to bring Ethernet to field-level instruments in hazardous areas.   Ethernet at the field level will make digitalization for process industries a reality with its universality and speed.  Current and voltage will be limited to have an intrinsically safe solution for zones 0 & 1 / Div 1.  The main goal is to adopt proven technologies and options in the field of process automation. The general topology will be based on the well-know trunk-and-spur configuration.

The FieldComm Group, ODVA and Profibus & Profinet International joined together to support the standardization of an APL that will be suitable for use in demanding applications in process instrumentation. This initiative leverages the work of the IEEE 802.3cg Task Force, including amendments to the IEEE 802.3 Ethernet standard for an Ethernet physical layer operating at 10 Mb/s over single-pair cable with power delivery. Additional developments define the requirements and develop the necessary technology to achieve an Industrial Ethernet suitable for use in hazardous locations up to Zone 0, Division 1.

The SPE Industrial Partner Network is an equal association of companies focused on advancing and promoting the Single Pair Ethernet technology.  The group believes Single Pair Ethernet is the infrastructure basis that makes industrial digitalization, IIoT and Industry 4.0 possible.  This is a strong partnership of industry leaders, who are united in their support of the T1 Industrial interface according to IEC 63171-6 as a uniform Media Depended Interface (MDI) as defined by ISO/IEC JTC 1/SC 25/WG 3 and TIA42 in 2018.

The SPE Industrial Partner Network is based in Rahden, Westphalia Germany. The group supports building a strong SPE ecosystem and is committed to providing users with valuable information.  The combining of the competencies of the individual companies is intended to give users the security they need to invest in this technology.  Founding member are Harting, Leoni, Murrelektronik, Würth Elektronik, TE Connectivity, Softing, HRS Hirose Electric Co. LTD.   First add members:  DEHN, Molex, Amphenol, Helukabel, igus, ZAHOLONG, ESCHA, Perinet, Lutze.

Lydon brings more than 10 years of writing and editing expertise to Automation.com, plus more than 25 years of experience designing and applying technology in the automation and controls industry. Lydon started his career as a designer of computer-based machine tool controls; in other positions, he applied programmable logic controllers (PLCs) and process control technology.