The Future of Blockchain in Intellectual Property

Blockchain is defined as a decentralized, distributed ledger technology that records the provenance of a digital asset. It is a system of recording information that is difficult to change, hack or cheat the system. In simpler terms, Blockchain is a technology where any digital information is distributed across the network, given the information is time stamped, immutable and transparent to everyone present in the network. Blockchain has prominent implications in various domains such as cryptocurrency, health care, real estate, voting systems, supply chain and logistics, etc.

Included below are five potential use-cases that Blockchain based Intellectual Property Management presents in the current state of intellectual property industry.

1. Blockchain based Smart Contracts in IP
A Smart contract is a computer program based on Blockchain technology that automatically gets executed whenever a predetermined condition is met in a transaction. In Intellectual property, transactions such as buying a patent involves many steps such as checking the assignment of the patent, checking the validity of the patent, negotiating the sale agreement, executing  and paying the transaction and then finally inform all relevant patent offices of the transaction. All these steps can be simplified using smart contracts. 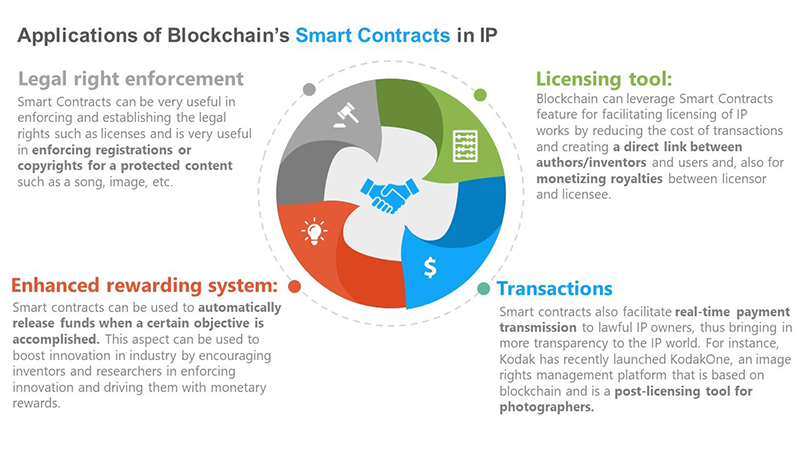 Future Scope: With the ever-increasing advancement in Blockchain technology, Smart contracts can be integrated widely in IPR domain given the need for a digitalized and secure transaction system that builds trusted relationship among the individuals without compromising on the security. As the IP world is opening-up to the advantages of the new age technologies, Smart Contracts deem to be extremely useful in terms of automatic initiation of legal and bindings contracts, especially for contents such as song, photographs, etc.

2. Blockchain for determining creatorship/Proof-of-Ownership
Blockchain technology can be used as a trusted platform for verifying the authenticity of ownership of IP works. A person wanting to get a patent over an invention can go to patent office to apply for a patent and secure his IP. However, in case of copyright because of the lack of any official documentation, the onus of proving ownership of a creative content lies with the creator. Exercising the copyright has become even more challenging in the era of internet, where anyone can download the content created such as a recorded song, a photograph, painting, etc. and can freely use it at will. 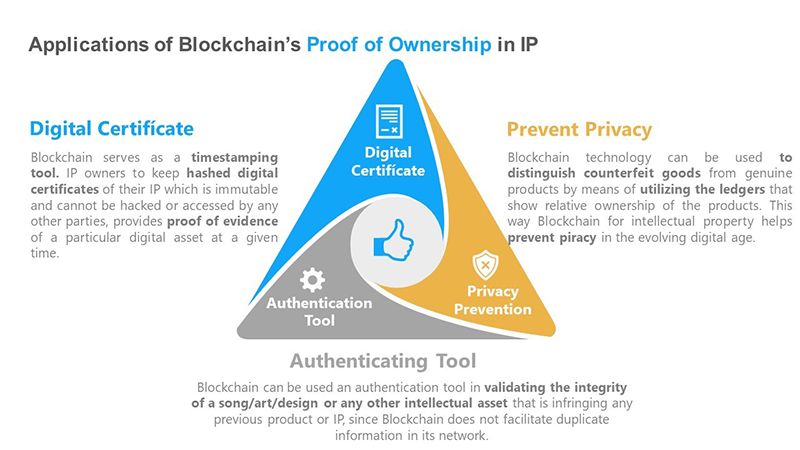 Future Scope: Given, the growth of digitalization and industry 4.0 technologies, there is need in the system for providing proof of ownership towards intellectual assets and their security. Fortunately, Blockchain is one such technology which could fulfil the need of the system by providing both security and proof of ownership towards intellectual assets. Many companies have already started providing blockchain based timestamping and validation system for safeguarding one’s digital assets.

3. Blockchain for enabling IP marketplace
Blockchain is one type of Distributed Ledger Technology (DLT). The Distributed Ledger Technology utilizes multiple independent computers (nodes) to record, share and synchronize transactions in their respective electronic ledgers. Blockchain can be used as a potential platform where inventors can place their inventions/digital works in the form of ledgers with short descriptions thereby acting as an IP marketplace. Further, Blockchain can also be used by inventors/patent holders who are wishing to find potential licensees for related know-how of the inventions. 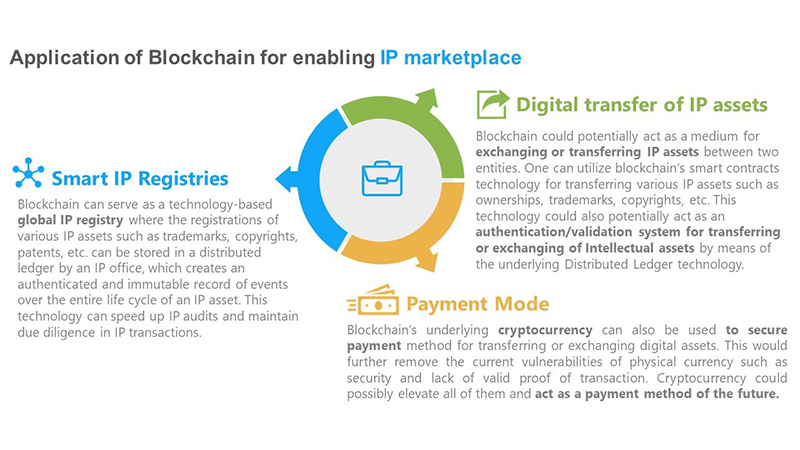 Future Scope: Blockchain’s Ledger technology has revolutionized the industry in terms of how information is shared. This new way of sharing information, without comprising on transparency, security and time-period will have a wider implication in every domain. As a matter of fact, IPR is also one such domain where sharing of information with necessary regulations has to be maintained and given the blockchain ledger technology, we could see a potential application in information sharing of IPR related data.

4. Blockchain for unifying global Patent/IP system
Blockchain with its decentralized ledger technology would also solve the problem of unifying the patent system across countries. This could vastly improve the effectiveness of IP management, speed up the innovation process in companies and foster the distribution of information across them through the ledger.

Current state-of-the-art: Many legislations and patent offices are slowly moving towards the acceptance of blockchain as “admissible evidence”. Below are some of the scenarios where courts or jurisdictions have considered blockchain as a proof of evidence under electronic evidences.

Future Scope: Given the immutability, security, and transparency of blockchain technology, it has the potential to become a global technology for protecting digital assets. Various legislations and governments are slowly accepting and inculcating blockchain as a proof of evidence. Going forward, blockchain could possibly be accepted as an underlying technology by most of the governments and could potentially unify the entire Intellectual property system.

Application of Blockchain’s version control in IP: Defensive publications are a way to prevent anyone from patenting an innovation by publicly disclosing it and thus creating a prior art for the innovation. Blockchain could serve as a defensive publication platform, where each file is given a unique fingerprint, duplications are removed, the platform supports versioning, and each network node can choose which content it is hosting, and the database is indexed and searchable.

Future Scope: Using blockchain based system for linking multiple digital assets and being able to timely control them, opens many possibilities for people to collaborate on various aspects and allows people to shape their ideas leading to a boosted innovation in the industry.