The impact of open manufacturing initiatives continues to be a worldwide affair. These initiatives continue to grow as industry recognizes the need to modernize and the Industry 4.0 movement (called “Industrie 4.0” in Germany, its country of origin) continues to accelerate. This has defined a pattern for all industrial automation organizations to use in order to achieve the goal of holistic and adaptive automation system architectures. Sustained competitiveness and flexibility to the dynamic technological growth, can only be accomplished by leveraging these advanced technologies, using automation as a center to enable a successful transition. As covered in previous reports, Germany’s Industrie 4.0 initiative ignited worldwide cooperative efforts in other countries, including China, Japan and India.

Inside the Asian Manufacturing Push

Asian economies have been very active in taking advantage of these new initiatives. This is a familiar pattern characterized by Japan’s post-World War II record period of economic growth in significant market share gains in several markets including automotive, television, and electronics. Each of the efforts in China, India and Japan mentioned here continue to gain in momentum. (Country Information comes from the World Economic Forum Report - Readiness for the  Future of Production Report 2018.)

Made in China 2025. Released in 2015, Made in China 2025 is the government’s ten-year plan to update China’s manufacturing base by rapidly developing ten high-tech industries, with the goal of transforming China into a “manufacturing superpower.” Goals include developing electric cars and other new energy vehicles, next-generation information technology (IT). telecommunications, advanced robotics, artificial intelligence, agricultural technology, aerospace engineering, new synthetic materials, advanced electrical equipment, biomedicine, high-end rail, and high-tech maritime engineering. Chinese policymakers drew inspiration from the German government’s Industry 4.0 development plan. The overall goal is to reduce China’s dependence on
foreign technology and promote Chinese high-tech manufacturers in the global marketplace. China 2025 has set specific targets: By 2025, China aims to achieve 70 percent self-sufficiency in high-tech industries, and by 2049— the hundredth anniversary of the People’s Republic of China—it seeks a dominant position in global markets.
Make in India. Make in India covers 25 sectors of the Indian economy and was launched by the Government of India in order to encourage companies to manufacture their products in India with dedicated investments into the country’s manufacturing industry. The ‘Make in India’ initiative has been providing support for both small and large companies to develop advanced manufacturing capabilities and invest in technology upgrades.
There is also a focus on infrastructure modernization, as part  of this effort, including smart cities. In addition to creating jobs, these initiatives are appealing to a new generation of workers with different values and skills.
Japan Society 5.0. Boldly identified as “Society 5.0,” Japan describes its initiative as a purposeful effort to create a new social contract and economic model, which fully incorporates the technological innovations of the fourth industrial revolution. It envisions embedding these innovations into every corner of its aging society. Underpinning this effort is a mandate for sustainability, bound tightly to the new United Nations global goals, the SDGs. Japan wants to create, in its own words, a “super-smart” society, and one that will serve as a road map for the rest of the world. With Society 5.0, the Japanese government and companies are working together to put developments in technology, especially in AI and automation, at the service of improving human society and evolving civilization as a whole. 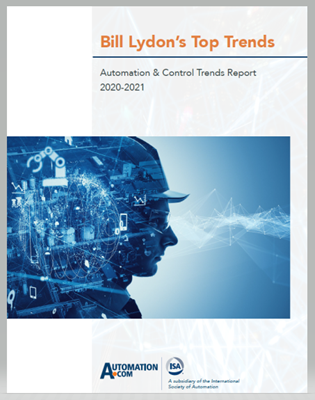 This article is part of Bill Lydon’s Top Trends, his Automation & Control Trends Report for 2020-2021. Download the full report here. Bill Lydon's Automation & Control Trends Report 2020-2021 reports on ten trends shaping the automation, control and instrumentation, and provides lists of related articles for each trend. This annual report is from Automation.com, a subsidiary of ISA--The International Society of Automation.  ​