The Coalition for Open Process Automation (COPA) launched the COPA QuickStart for companies to leverage the Open Process Automation System (O-PAS) standard to be more competitive and profitable. The move to open industrial and process automation systems is analogous to the shifts that occurred when PC technology displaced minicomputer and mainframes.

The Coalition for Open Process Automation (COPA) launched the COPA QuickStart for companies to leverage the Open Process Automation System (O-PAS) standard to be more competitive and profitable. Open systems enable users to pick from a wide range of hardware and software to find the best fit to requirements. The current major automation vendor gated partner ecosystems are primarily focused on optimizing their profits and capturing the customer. Open Process Automation System  (O-PAS) standard is focused on making manufacturing companies more profitable and competitive. The move to open industrial and process automation systems is analogous to the shifts that occurred when PC technology displaced minicomputer and mainframes.

The structure of process & discrete automation and control architectures are becoming open following the extraordinarily successful trend that continue to accelerate efficiency and profitability throughout business and commerce.  The digitalization is redefining the factors for competitive success in process and discrete manufacturing with implementation of concepts, software, products, and open architecture driven by Industry 4.0 and the Industrial Internet of Things (IIoT). The COPA QuickStart for companies provides a defined method to leverage the Open Process Automation System Standards (O-PAS) with the guidance of  experts for process manufacturing companies to be competitive and profitable in the new environment.

Don Bartusiak founder and president of Collaborative Systems Integration LLC has become known as a significant champion of Open Process Automation starting with the compelling presentation at the 2016 ARC Forum in Orlando, Florida announcing ExxonMobil next generation multivendor automation architecture initiative. He described how industry has had enough of enough of proprietary, closed systems and the future is multi-vendor interoperable standards-based, open, secure, and interoperable architecture, with commercially available software and hardware components. Bartusiak’s emphasized, “industrial manufacturers have repeatedly told me if O-PAS based systems were available, they would buy them. The COPA QuickStart offering is our answer to that challenge.” 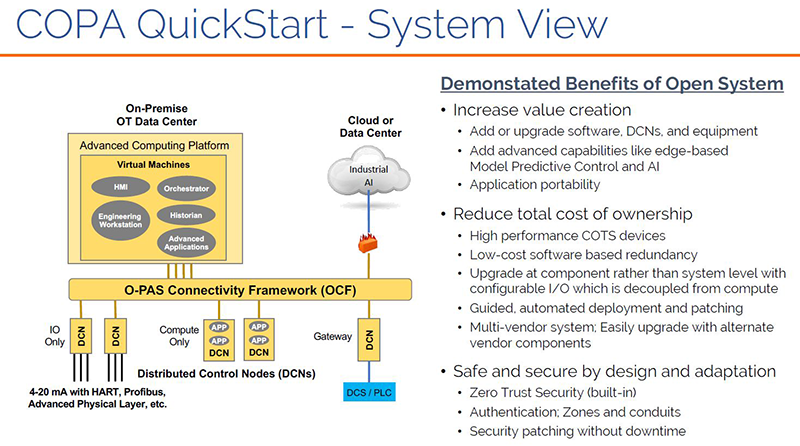 Compliance of the victim

I have talked with many users over the last few years that express their frustrations with existing systems and the lack of modern and open technology. Listening to Don Bartusiak’s  2017 ARC conference presentation I realized unhappy automation system users that are continually frustrated and do not take action to help change the industry are compliant victims as I described in this article, Compliance of the Victim: ARC Industry Forum Highlights an Industry in Transition. Don Bartusiak and others took action and the result has been the development of  The Open Process Automation Forum to achieve an open process standards-based, open, secure, and interoperable process control architecture, which will enable manufacturers to achieve greater business value, profits and compete effectively.

The Open Process Automation Forum has grown with companies that realize to remain competitive and gain more flexibility and efficiency, manufacturers must modernize and completely integrate their manufacturing infrastructures. The holistic vision is real-time advanced optimization, analytics, linking of supply chain, design, manufacturing, outbound logistics and lifecycle service. This integration can only be efficiently accomplished by leveraging the latest technologies.

The adoption of new technology during times of significant innovation is critical for manufacturing success. If your competitors adopt better methodologies and technology, they have a high probability of outpacing you in the marketplace.

Industrial automation vendors have the unique opportunity to be on the right side of the automation technological advance developing standards-based system to participate in growing open standard ecosystems, but they must move quickly before the tipping point is reached and other companies capitalize on the significant changes dictated from outside the industry. Industrial automation suppliers that fully embraces the open interoperable ecosystem will benefit greatly by being responsive to user needs. 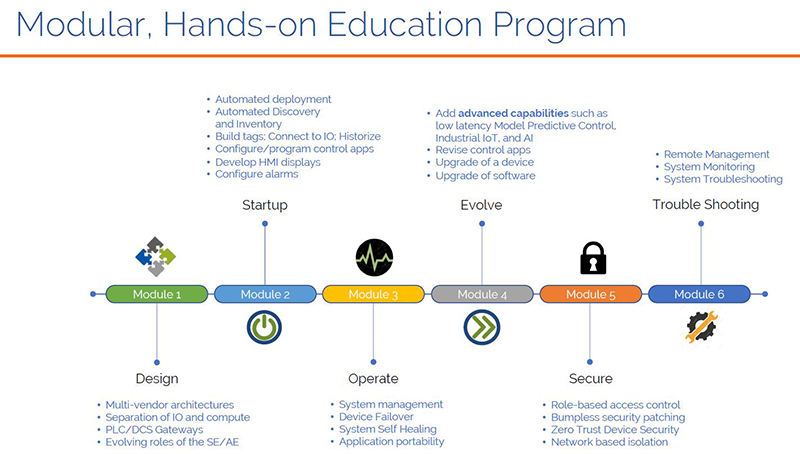 More information is available by visiting this website or by contacting CPLANE.ai.

Bill Lydon brings more than 10 years of writing and editing expertise to Automation.com, plus more than 25 years of experience designing and applying technology in the automation and controls industry. Lydon started his career as a designer of computer-based machine tool controls; in other positions, he applied programmable logic controllers (PLCs) and process control technology. Working at a large company, Lydon served a two-year stint as part of a five-person task group, that designed a new generation building automation system including controllers, networking, and supervisory & control software.  He also designed software for chiller and boiler plant optimization.   Bill was product manager for a multimillion-dollar controls and automation product line and later cofounder and president of an industrial control software company.