Rise of the Internet of Things Jobs

In 2019, nearly two-thirds (61%) of companies globally implemented IoT applications, and that number continues to grow as the world evolves.

Known as the Internet of Things (IoT), there are now over 30 billion items with the ability to connect digitally, and the industry continues to grow, thanks to the skills of trained professionals. The development of IoT jobs and their crucial role in keeping up with demand has meant that there is no shortage of job opportunities on the horizon.

In 2019, nearly two-thirds (61%) of companies globally implemented IoT applications, and that number continues to grow as the world evolves.

With this in mind, Distrelec has analysed the companies recruiting for IoT jobs, the total number of active listings globally, and the most desirable jobs in 2022. 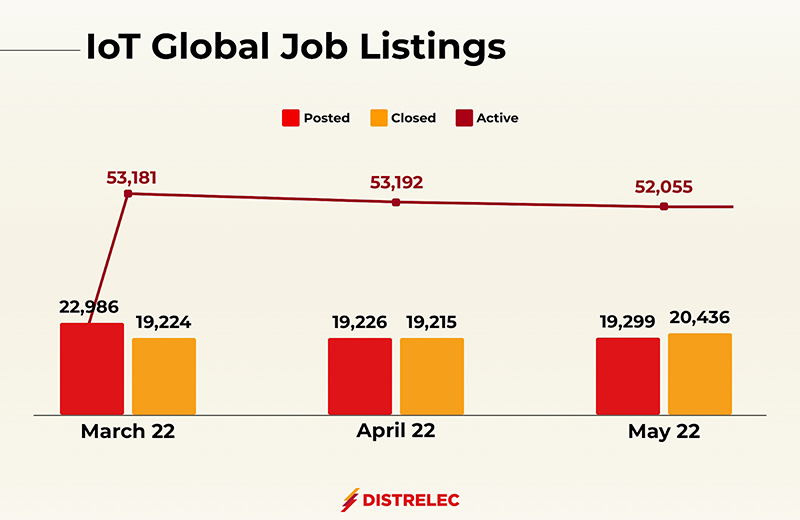 In March this year alone, almost 23,000 IoT jobs were newly listed around the world, with companies recruiting for Senior Firmware Engineers, Systems Engineers, UI Developers and more. In that same month, 19,224 positions were closed, whilst there were 53,181 total active listings, signalling that IoT technologists were in high demand.

Although new job listings dropped slightly throughout April of this year, the number of closed positions also declined slightly, meaning that the total active listings still saw a slight increase at 53,192. In comparison, May saw the highest number of positions closed, with 20,436 IoT roles filled within the month. 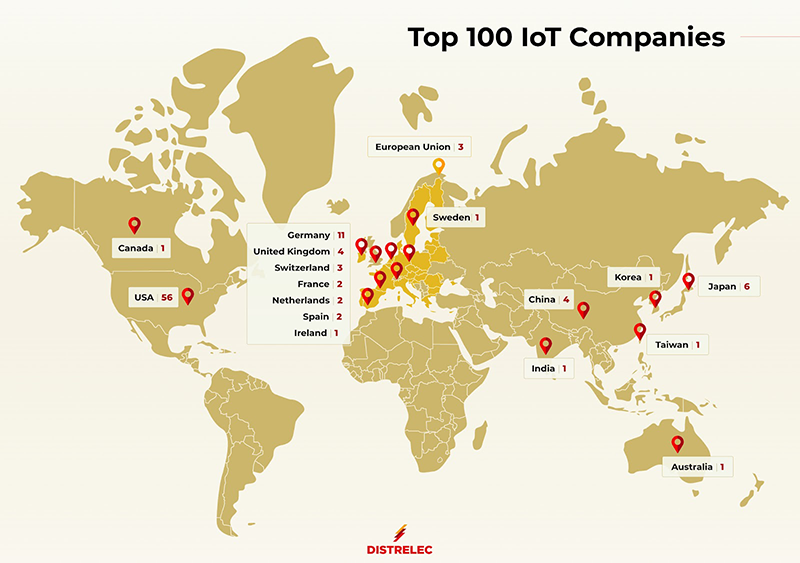 Of the Top 100 IoT companies in the world, just over half are based in the USA, with PTC, Intel and Honeywell all making the Top 10. Named "Industrial Internet of Things Company of the Year" in 2017 and known globally for its ThingWorx technology, PTC has changed the game in digital transformation across the years. This technology has since become widely used in Industrial IoT to aid in the development of smart products and solutions.

According to research by Intel, 55% of all data is forecast to be generated by IoT in 2025, with 43% of AI tasks projected to happen on edge devices in 2023. In response, the company has produced processors with IoT applications in mind. Honeywell, based in North Carolina, operates primarily in aerospace, building technologies and productivity solutions. Providing products ranging from airflow sensors to snap action switches, the company is ranked 6th in the world for IoT solutions.

Germany follows behind, with 11 companies present throughout the list. Siemens, with headquarters in both Munich and Berlin, places first in the world. Siemens is responsible for MindSphere, the cloud-based IoT operating system that enables users to collect data from sensors in real-time, most prominently used throughout the industrial and manufacturing sectors.

Also present in the list is SAP, which offers a Business Technology Platform, and Bosch which has developed ‘The Bosch IoT Suite’; a software platform created to provide users with the technological basis needed for IoT solutions.

Japan is currently home to six companies ranked in the Top 100, with Mitsubishi Electric placing first in the country. Meanwhile, Huawei takes the top spot in China.

UK companies present in the Top 100 include Vodafone, Arm, Telit and Eseye. As the highest-rated IoT provider in the UK according to this list, Vodafone recently released a new ‘Vodafone Heat Detection Camera’ in response to the COVID-19 pandemic, marketed as a tool to help employers identify one of the symptoms in a safe and effective way. The technology also extends to different working sectors including, but not limited to, ‘Smart Offices’ for office workers and fleet analytics for tracking ambulances and other emergency vehicles within the Healthcare sector. 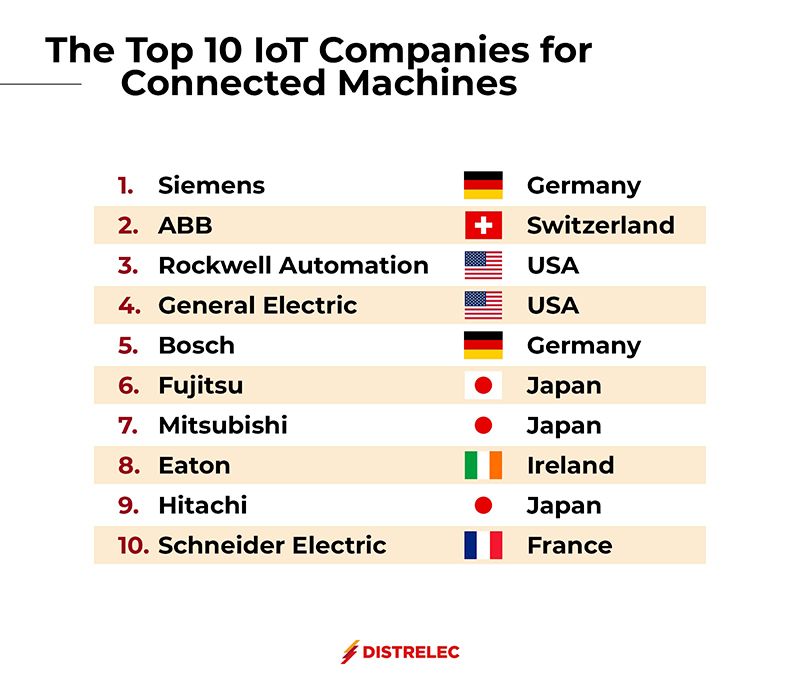 Specializing within industrial and manufacturing sectors, Siemens is the top IoT company in the world for Connected Machines. The market is segmented into hardware, software and services, and Siemens provides the MindSphere software that allows manufacturing professionals to access insights from real-world use and be provided with feedback in real-time.

ABB, based in Switzerland, is a provider of industrial IoT applications. Focusing strongly on connected oil and gas production and extending to connected renewables, vessels, mines and paper mills among other industrial industries.

American provider of industrial automation, Rockwell Automation, places third. Their aim is to make the world more productive and sustainable through IoT solutions, working with sectors from Infrastructure to Pulp and Paper.

General Electric, also based in the USA, provides services, solutions and equipment to those within the energy sector. GE Digital, a subsidiary of the multinational conglomerate, utilises its ‘Predix Platform’ technology to host applications such as Asset Performance Management (APM) and Operations Performance Management (OPM), providing data connectivity and analytics processing to users. 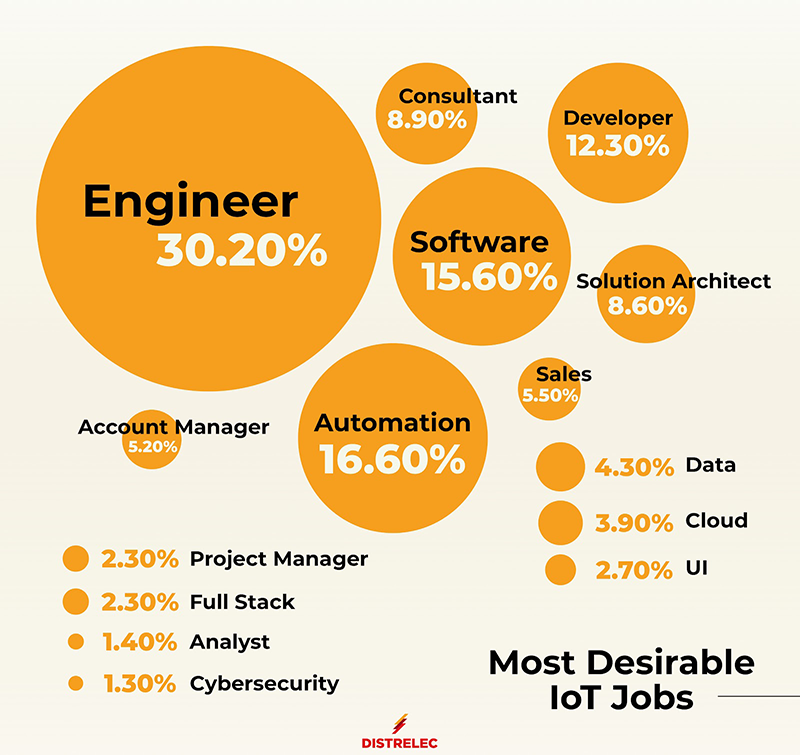 When taking a look at the most desirable IoT jobs, Engineer takes the top spot with 30.20% of jobs analysed including this title; most notably IoT Research Engineers and IoT Software Engineers. Research Engineers provide data-driven solutions, whilst developing products, processes or technology.

In the third spot sits Software. Performing the work of building software, Software Engineers are responsible for the creation of desktop, mobile and web-based applications. The level of experience for this role can determine your annual salary ranging from $84,020 to $123,000.

Total IoT jobs data was taken from www.globaldata.com Top IoT companies were taken from the IoT ONE Top 500 list for 2022. Each company’s global job postings were analysed from each company site until each company set included 100 jobs, or until all job listings had been collected.

Rod develops his passion for engineering electronics through working as a head of product management at Distrelec, focusing on electronics and innovation technology. He has 17 years of experience in the electronics distribution industry with different roles from Technical advisor to Global Product Manager at Farnell. Rod joined Distrelec in 2015, developing suppliers and product strategies and being responsible for electronic components, including semiconductors & passive, single board computing, automation, sensors and IT.