Recent news for the industrial robots market hasn’t been cheering, but the future for the sector looks good, with global shipments forecast to increase by over 9% in 2021, and a CAGR of 4.6% forecast for the period 2021-2024.

Recent news for the industrial robots market hasn’t been cheering, but the future for the sector looks good, with global shipments forecast to increase by over 9% in 2021, and a CAGR of 4.6% forecast for the period 2021-2024.

Major revisions in previous forecasts brought about by unprecedented events

The Covid-19 pandemic has not been the only drag on the economy in the past couple of years. Even pre-Covid, 2019 was not a good year. As reported by the IMF in July 2019, the global economy was dipping before the pandemic hit the world. Sino-US tariff wars, weak demand from the global automotive and electronics industries, Brexit-related uncertainty and geo-political tensions all played their part in subduing global growth. Then came the virus to further disrupt an already weak economy. The robotics industry was hit particularly hard in those two years, seeing continuous negative growth. In our new industrial robots report, Interact Analysis highlights the downturn for robotics by looking at our own predictions made in Q3 2019 in the second edition of the report, and comparing them with revised figures made in the new third edition. 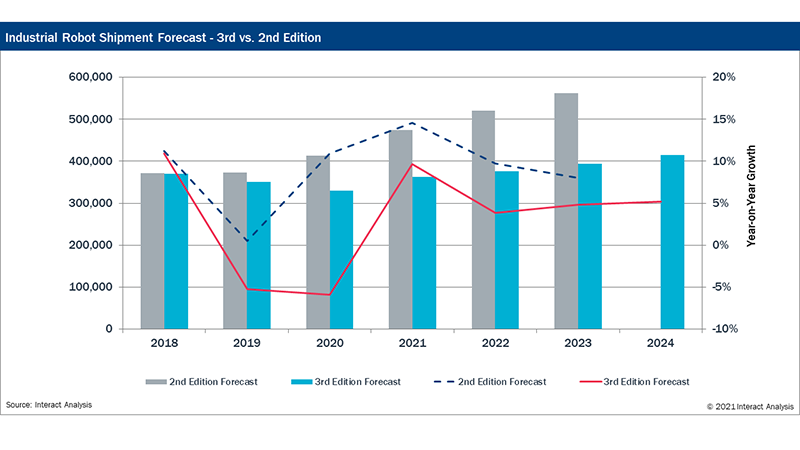 The chart above shows the effect of the slow-down in 2019 on the robotics industry, when shipments fell by 5.4%, and the profounder effect of the pandemic of 2020 when they fell by 5.9%. Put more starkly, there were 80,000 unit shipments less in 2020 than previously forecast.

Although earlier forecast figures for the longer term are not now going to be realised, Interact Analysis has identified strong drivers for the increasing use of automation and industrial robots. These include new industry applications and reducing prices. Revenues are forecast to accelerate in 2021 with an increase of 9.2% in revenue terms and 9.6% in shipment terms. Thereafter there will be a steady uptick in shipments.

The key reference point to note on the below chart is the 100% line. This is the point at which shipments of industrial robots return to their 2019 levels following the Covid-19 shock. As can be clearly seen, all classes of robot except articulated robots are predicted to return to 2019 shipment levels before 2021. The sluggish market growth rate of articulated robots is explained by their predominant use in the automotive industry, which has been hit badly in the past two years. This downturn is predicted to continue. SCARA robots, used for light duty pick and place and assembly operations, have suffered delayed demand in the 3C industry but are predicted to rebound swiftly as their potential for use in different applications is recognised.

Market growth for Delta robots, used in the food and beverage and pharmaceutical sectors will be steady, whilst Collaborative robots are expected to show negative growth for the first time in 2020, but their growth rate is predicted to be an impressive 15-20% year-on-year up to 2028. They are currently strongly established in the electronics sector, but they are a relatively nascent technology offering the potential to be applied across a range of sectors. Cartesian robots are, like SCARA robots, used in material handling. Other applications include pick & place and packaging. Their advantage over SCARA robots is that they offer heavier payload options, and it is these that will drive their market. 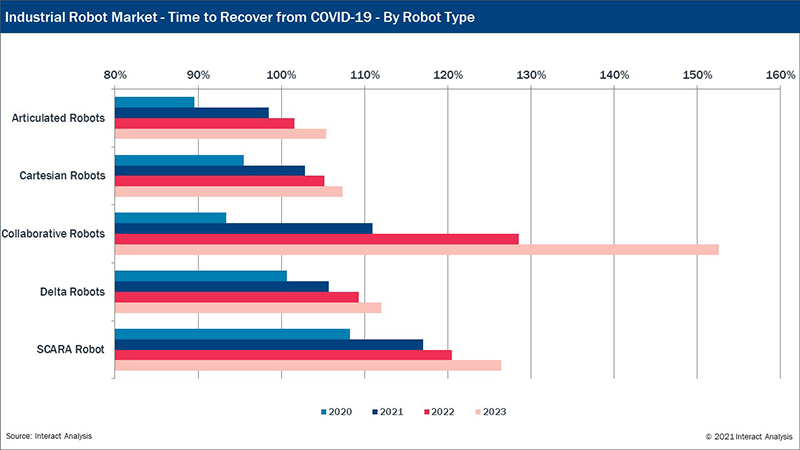 The pattern of regional recovery for the industrial robot sector is very similar to that of other industrial sectors. The virus started in the Asian regions, and then moved to Europe and North America, and the infection continues to spread. As a result, normal business operations will resume earlier in the Asia-Pacific region, and this will impact on robot shipments in those areas, most notably in China, where stringent measures had brought the virus under control by May 2020. The impact of the virus on the industrial robot sector in the Asian regions, particularly China, has in fact been relatively small, and the Chinese market is the only one forecast to surpass 2019 levels by 2021. This is in the main due to the large domestic demand in China. Covid-19 has had greater impact on foreign trade. 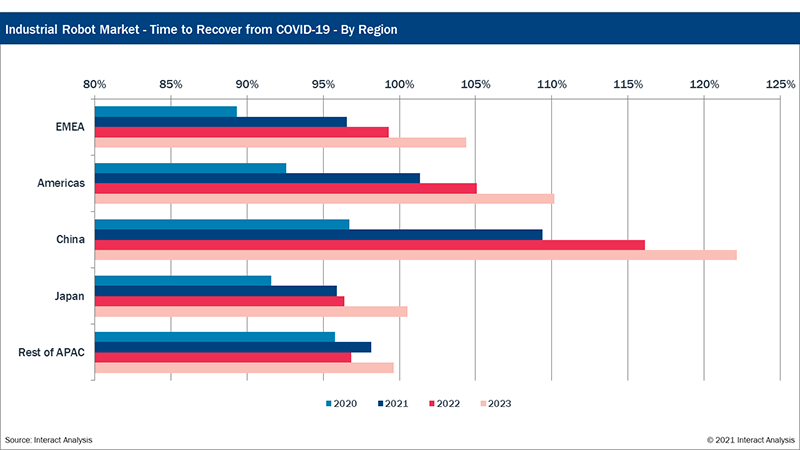 Interact Analysis predicts that by 2023 all regions will have surpass 2019 levels of industrial robot shipments, with China and North America achieving the highest growth rates. 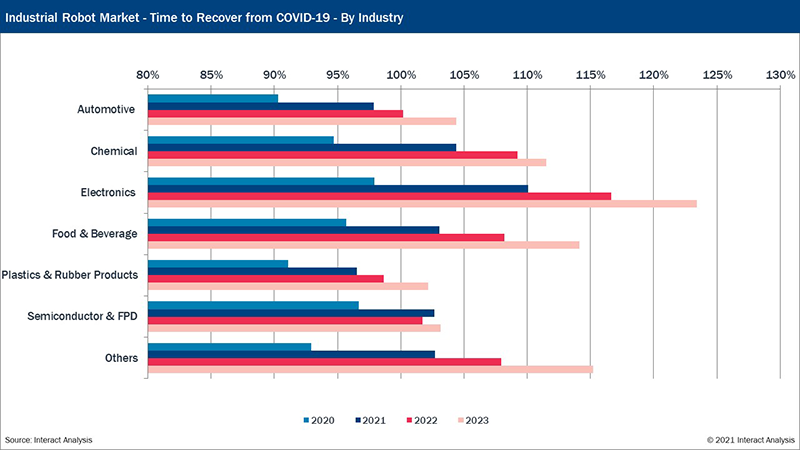 Robotics: An industry keenly dependent on the health of end-users

The semiconductor and FPD industries are the only end-users which maintained or increased demand for collaborative robots (while slightly decline for whole industrial robot market) in 2020, mainly in the Asian market. Automotive and electronics accounted for nearly 60% of robotics revenues in 2019 but automotive continues to be weak and the sector will not surpass 2019 levels of demand for robotic solutions until 2022. Electronics is forecast to recover slightly earlier than automotive, having shown good signs of recovery in 2020, again especially in the Asian markets. Notwithstanding the difficulties the automotive sector has experienced, the two sectors will still account for over 55% of revenues in 2024. The chemical and pharmaceutical and food and beverage industries saw stable product demand throughout the pandemic and there was a very limited reduction in their demand for robotic solutions. Interact Analysis predicts that growth and technological advances in these sectors will put significant pressure on demand for robots in the forecast period.

Where suppliers of industrial robots are concerned there are many new entrants to the market bringing with them exciting new technologies, but 4 major manufacturers–Fanuc, Yaskawa, ABB and Kuka–took an estimated 58% of revenues in the world market in 2019, and continue to dominate. The market has been led by articulated robot suppliers, because of their many payload options and the industries and applications they can serve but take note of the slowdown in articulated robot sales noted earlier. Things may change, especially with the promised coming of age of the collaborative robot.  Japan is home to most leading suppliers, including the world leaders in industrial robots, Fanuc and Yaskawa.
Although the technology used in robots is becoming more advanced, Interact Analysis forecasts the price of industrial robots will continue to fall at a rate of around 3-5% a year from 2019 to 2024 – a likely significant driver of investment by end-users.

Forecasting during the pandemic: The challenges faced

At the point of writing this report, the pandemic continues to sweep across the world, with second and even third waves emerging in many countries. Factory shutdowns have caused considerable damage to the smooth operation of the entire manufacturing industry. The uncertainty caused by the pandemic makes economic predictions particularly difficult.

In any particular region, the performance of an individual product type in a single industry may change dramatically within a short period. Interact Analysis has responded to this challenge by introducing a frequently updated product tracking service into their report, to keep industrial planners ahead of the field.