Azure IoT leverages OPC UA so industrial operations personnel get support for open systems and “don’t forget what [they] already know” when connecting OT systems to the cloud.

Microsoft has been a major software technology supplier to the industrial automation industry since the mid-1980s and is now providing a comprehensive manufacturing business architecture to reap the benefits of digitization with Azure Industrial IoT. Comprehensive industrial digitalization platforms empower manufacturers to integrate entire manufacturing business improving & production performance and profits based on their knowledge and know-how without having to design and maintain the entire platform.

Microsoft has been engaged in industrial automation for many years, starting with DOS applications and dramatically accelerated with the introduction of the Windows operating system in 1985. Wonderware’s 1987 introduction of InTouch Windows-based HMI added significant features and open interfaces to IT and business systems. Microsoft Windows provided a rich environment that spawned a large ecosystem of developers providing software for a wide range of industrial applications including databases, analysis, advanced control, Manufacturing Execution Systems (MES), batch management, production tracking and historians. Windows also provided the platform for development of OPC which significantly simplified software drivers for industrial networks and equipment interfaces.

Step by step to digital transformation

Barnstedt stated, “When we first started working in the industrial space over 15 years ago, it came back to us over and over again: manufacturers were complaining they were locked into certain vendors that were dictating prices and keeping data in silos. When we set up the AZURE IoT team, we wanted to build the product in a way that avoids vendor lock-in.” Barnstedt emphasized these points about vendor lock-in:

Barnstedt believes this “makes you forget what you already know! This locks you into a vendor, creates extra configuration and implementation costs and limits flexibility. Based on this, the Azure IoT team created a set of business and technology principles.”

Barnstedt elaborated that most importantly vendor lock-in does makes you forget what you already know because the data and data models you’ve already created cannot be used with multiple vendor systems and you have to start all over configuring data models describing your existing data in a new format and a new model which cost you time and money and locks you into that particular vendor.

Barnstedt clarified a common misconception that OPC UA in MQTT are competitive technologies, noting they are complementary.

Lightweight cloud Telemetry is common with OPC UA as a JSON payload on top of MQTT including data types. 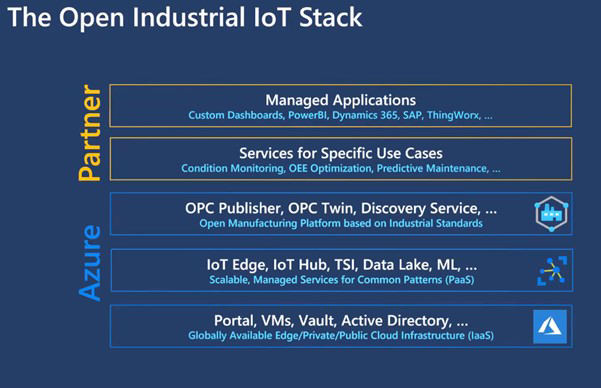 Bill Lydon brings more than 10 years of writing and editing expertise to Automation.com, plus more than 25 years of experience designing and applying technology in the automation and controls industry. Lydon started his career as a designer of computer-based machine tool controls; in other positions, he applied programmable logic controllers (PLCs) and process control technology. Working at a large company, Lydon served a two-year stint as part of a five-person task group, that designed a new generation building automation system including controllers, networking, and supervisory & control software.  He also designed software for chiller and boiler plant optimization. Bill was product manager for a multimillion-dollar controls and automation product line and later cofounder and president of an industrial control software company.