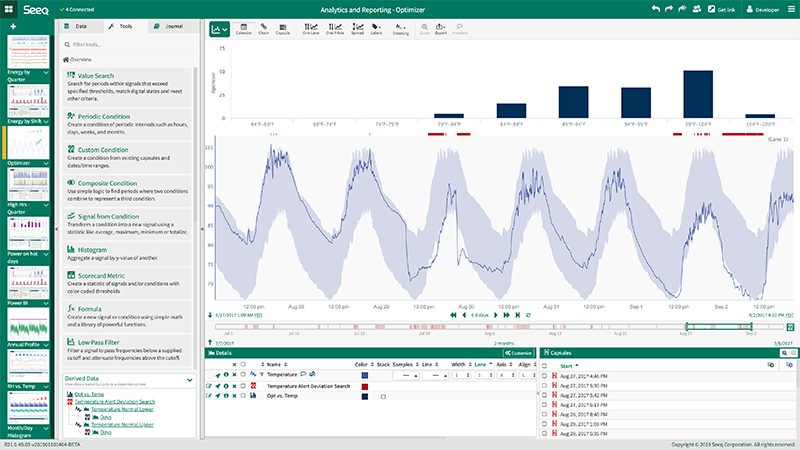 Seeq also announced it was chosen as a 2020 Red Herring Top 100 North America Winner which recognizes the continent’s most exciting and innovative private technology companies. 2020 Red Herring Top 100 winners were chosen from thousands of entrants, whittled down to hundreds, and then judged on a wide variety of criteria including financial performance, innovation, business strategy, and market penetration.
Earlier this year, Seeq landed at No. 261 on the Inc. 5000 list, a prestigious ranking of the nation’s fastest-growing private companies published by Inc. magazine.

“Analytics software for manufacturing customers is an area overdue for innovation,” said Steve Sliwa, CEO and co-founder of Seeq. “Spreadsheets replaced pen and paper 30 years ago for analytics and haven’t changed much since. By leveraging big data, machine learning and computer science innovations, Seeq is enabling a new generation of software-led insights.”

Seeq’s innovation and market traction enabled it to close a Series B expansion in September with an investment from Cisco Investments and existing investors. Renewed participation came from Saudi Aramco Energy Ventures, Altira Group, Chevron Technology Ventures, Second Avenue Partners, Next47, the venture group for Siemens, and other existing investors. The Series B expansion increased capitalization by approximately $30 million, which is in addition to previous Series B funding led by Altira Group and Saudi Aramco Energy Ventures, bringing the total investment in Seeq since its inception to approximately $65 million.

Seeq’s rapid growth is being fueled in part by its partnerships and commitment to cloud-based computing. Seeq is available in the AWS marketplace, is an AWS Industrial Competency Partner, and supports many AWS services including Redshift, Timestream, SageMaker, and others.

On Azure, Seeq has been available in the Azure Marketplace since 2018 and was recently recognized as a 2020 Microsoft Energy Partner of the Year Finalist. Support for Azure services includes Azure Synapse, Azure Data Lake, Azure Data Explorer, Azure Time Series Insights, Azure Notebooks for machine learning integration, and Power Automate.

Seeq is available worldwide through a global partner network of system integrators, which provides training and resale support for Seeq in over 40 countries, in addition to its direct sales organization in North America and Europe.

Deloitte refers to one or more of Deloitte Touche Tohmatsu Limited, a UK private company limited by guarantee (“DTTL”), its network of member firms, and their related entities. DTTL and each of its member firms are legally separate and independent entities. DTTL (also referred to as “Deloitte Global”) does not provide services to clients. In the United States, Deloitte refers to one or more of the US member firms of DTTL, their related entities that operate using the “Deloitte” name in the United States and their respective affiliates. Certain services may not be available to attest clients under the rules and regulations of public accounting.

The world’s most trusted business-media brand, Inc. offers entrepreneurs the knowledge, tools, connections, and community to build great companies. Its award-winning multiplatform content reaches more than 50 million people each month across a variety of channels including websites, newsletters, social media, podcasts, and print. Its prestigious Inc. 5000 list, produced every year since 1982, analyzes company data to recognize the fastest-growing privately held businesses in the United States. The global recognition that comes with inclusion in the 5000 gives the founders of the best businesses an opportunity to engage with an exclusive community of their peers, and the credibility that helps them drive sales and recruit talent. The associated Inc. 5000 Conference is part of a highly acclaimed portfolio of bespoke events produced by Inc.

Red Herring’s editors have been evaluating the world’s startups and tech companies for over two decades. It gives them the ability to see through the industry’s hype to pick firms that will continue on a trajectory to success. Brands such as Alibaba, Kakao, Skype, Spotify, Twitter and YouTube have all been singled out in Red Herring’s storied history. Winners ran the gamut of verticals, from FinTech and Artificial Intelligence to Security, IoT, and embody the drive, skill and passion on which tech thrives. Red Herring supports the winner’s continued path to success and innovation with participation in Top 100 Global event next year that will encompass the best-in-show from the Top 100 Europe, North America, and Asia.