Ultra-long-life lithium batteries can overcome the problem of high self-discharge to run for long distances while delivering the high pulses required for two-way wireless communications. From Volume 1 of the Automation 2021 Ebook: IIoT & Industry 4.0.

Low-power devices can run long distances by carefully conserving energy. Two types of low-power wireless devices are available: those that draw an average current in microamps, typically powered by an industrial-grade primary (nonrechargeable) lithium battery; and those that draw average current in milliamps, enough to prematurely exhaust a primary battery. Because these applications involve greater energy consumption, they can require the use of an energy harvesting device in tandem with an industrial-grade rechargeable lithium-ion (Li-ion) battery.

Specifying an ultra-long-life battery involves numerous parameters, including: the amount of current consumed while in active mode (including the size, duration, and frequency of pulses); the amount of energy consumed while in standby mode (the base current); storage time (as normal self-discharge during storage diminishes capacity); thermal environments (including storage and in-field operation); and equipment cut-off voltage, which drops as cell capacity is exhausted or during prolonged exposure to extreme temperatures. Most important is the annual self-discharge of the cell, which often exceeds the amount of current required to operate the device. 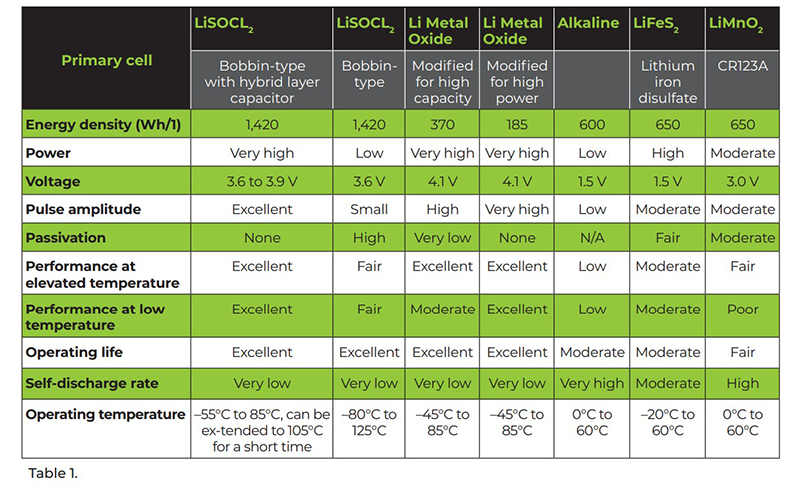 Lithium stands apart as the lightest nongaseous metal, with a high intrinsic negative potential that exceeds all others, resulting in the highest specific energy (energy per unit weight) and energy density (energy per unit volume) of all commercially available chemistries. Lithium cells operate within a normal operating current voltage range of 2.7 to 3.6 V. These chemistries are also nonaqueous, whereas waterbased chemistries can freeze in extremely frigid temperatures.

Lithium thionyl chloride (LiSOCl2 ) chemistry, which offers the longest operating life, is constructed in two ways: bobbin-type or spiral wound. Spiral wound cells are specified for applications that require higher energy flow. Bobbin-type cells are better suited for low-power applications due to their higher capacity and higher energy density, as well as a wider temperature range (–80°C to 125°C). A key feature of bobbin-type LiSOCl2 chemistry is its exceptionally low annual self-discharge rate (less than 1% per year for certain cells), permitting up to 40-year battery life.

Battery self-discharge is common to all chemistries, as chemical reactions naturally consume energy even while a cell is inactive. Fortunately, you can modify the self-discharge rate of a bobbin-type LiSOCl2 battery by controlling the passivation effect.

Passivation occurs only with LiSOCl2 batteries, caused by a thin film of lithium chloride (LiCl) that forms on the surface of the lithium anode, separating the anode from the electrode to limit the chemical reactions that cause self-discharge. When a load is placed on the cell, the passivation layer causes initial high resistance along with a temporary drop in voltage until the discharge reaction slowly dissipates the LiCl layer: a process that repeats itself each time the load is removed.

Several other factors can influence cell passivation, including current discharge capacity, the length of storage and storage temperature, discharge temperature, and prior discharge, as partially discharging a cell and then removing the load can increase the amount of passivation relative to when the cell was new.

The good side of passivation is its ability to minimize battery selfdischarge. The bad side is that too much of it can restrict energy flow.

Self-discharge is also affected by the cell’s current discharge potential, the method of manufacturing, and the quality of the raw materials. The highest-quality bobbin-type LiSOCl2 cell can feature a self-discharge rate as low as 0.7 percent per year, retaining 70 percent of its original capacity after 40 years. Conversely, a lower-quality bobbin-type LiSOCl2 cell can experience a self-discharge rate of up to 3% per year, losing 30% of its initial capacity every 10 years, making 40-year battery life impossible.

Be aware that it can take years for battery selfdischarge to become fully apparent and that theoretical test data tends to be unreliable. For these reasons, thorough due diligence is required, especially if the battery needs to run for the life of the device.

Standard bobbin-type LiSOCl2 cells cannot deliver the high pulses required for two-way communications: a challenge that can be easily overcome with the addition of a patented hybrid layer capacitor (HLC). The bobbin-type LiSOCl2 cell delivers nominal background current during “standby” mode, while the HLC works like a rechargeable battery to generate high pulses up to 15A. As an added bonus, the HLC also features an end-of-life voltage plateau that can be interpreted to communicate “low battery” status alerts.

The runner analogy: Winning a marathon

The distance is equivalent to the battery/device operating life. The farther a runner can travel, the more years a device will be able to operate.

Hurdles are equivalent to pulses. The higher the hurdle, or obstacle, the higher the pulse required to support two-way wireless communications and other advanced functionality.

Supercapacitors provide the same function in consumer electronics but are generally not suited for industrial applications due to inherent limitations, including short-duration power, linear discharge qualities that do not permit full discharge of available energy, low capacity, low energy density, and a very high self-discharge rate of up to 60 percent per year. Supercapacitors linked in series require cell-balancing circuits that are bulky, expensive, and draw additional energy to further shorten their operating life.

Here are some typical real-life examples that rely upon bobbin-type LiSOCl2 batteries:

Cryoegg: Researchers studying the relationship between climate change, rising sea levels, and deep-water channels beneath glaciers in Greenland and Antarctica use Cryoegg, a remote wireless sensor that continuously monitors temperature, pressure, and electrical connectivity. Cryoegg eliminates the need for bulky and expensive cables that can be easily damaged by glacial movement. Bobbin-type LiSOCl2 cells were specified due to their high capacity, high energy density, wide temperature range, and high pulse capabilities.

Oceantronics: To simplify the transport of scientific equipment across the Artic, Oceantronics redesigned the battery pack for its GPS/ice buoy by replacing a huge battery pack consisting of 380 alkaline D cells with a more compact, lighter, and cost-efficient solution using 32 bobbin-type LiSOCl2 cells and four HLCs. The company achieved a 90 percent reduction in size and weight (54 kg down to 3.2 kg), enabling the GPS/ice buoy to be more easily transported by helicopter. Converting from alkaline to LiSOCl2 chemistry also multiplied the device’s operating life manyfold.

Southwire: Reducing size and weight is highly beneficial to utility line crews installing line/connector sensors that monitor temperature, catenary, and line current on utility power lines to warn if a transmission line goes down. Use of bobbin-type LiSOCl2 cells enables a more compact and lightweight (3.5 lb) solution that can handle extreme temperatures (–40°C to 50°C), providing months of backup power if no line current is detected.

While primary batteries continue to dominate, we are also seeing a dramatic rise in applications that draw milliamps of current, enough to quickly exhaust a primary lithium battery. Returning to our runner analogy, these applications burn up more calories, thus requiring the use of an energy-harvesting device in tandem with an industrial-grade rechargeable lithium-ion battery. 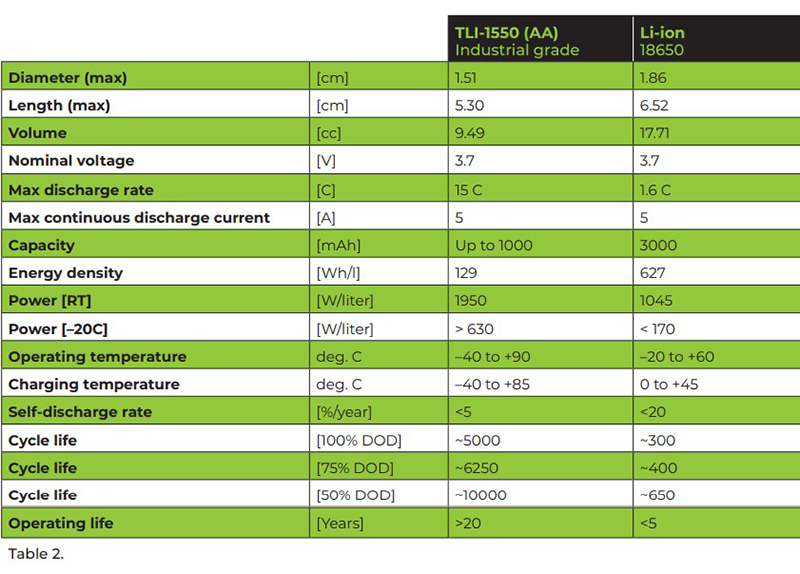 In the long run, it often pays to specify an extended life battery to increase product reliability while also reducing the total cost of ownership. 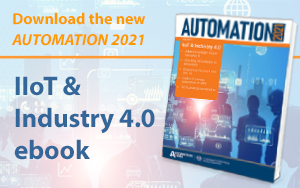 Sol Jacobs is VP and general manager of Tadiran Batteries. He has more than 30 years of experience in powering remote devices. His educational background includes a BS in engineering and an MBA.